Local teams not letting Mother Nature get the best of them

March 17 is the first day the IHSA allows baseball and softball games to be played. With this year’s unusually inclimate weather, area teams have had to get creative in dealing with Mother Nature. 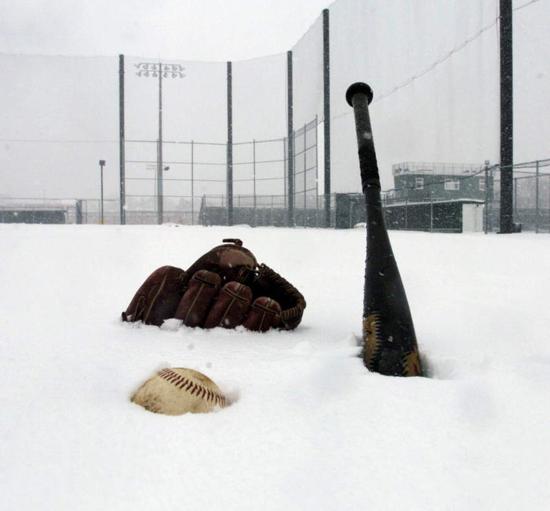 Michael Schmidt mschmidt@scn1.com 03-21-2008 I stuck some baseball stuff in the snow to see how deep the snow was at the Grayslake Central High School baseball field and it was about 8 inches deep and increasing.

Heading into his 15th season as Mount Carmel baseball coach, Brian Hurry is certainly used to everything Chicago spring weather has to offer.

And then there’s this spring, with its near-record snowfall, fluctuating temperatures and rainfall.

March 17 is the first day the IHSA allows baseball and softball games to be played.

“It’s just been at a different level this year,” Hurry said. “We practiced once outside, but then it snowed again [last week] so it was a bit of a tease. The weather always presents a challenge, but as a baseball coach, you’re used to it.”

Mount Carmel was primed to open its 4A championship defense Monday, the Caravan welcoming Lake View to Haggerty Field.

Trapped indoors through the first weeks of practice, Hurry has done everything he can to keep his team sharp. Drills, batting practice, classroom sessions, even a yoga session to switch things up. The Caravan are itching to get outdoors though, and Hurry has a solution.

Mount Carmel has an agreement to play games at Chicago State on March 28th versus Bremen and on March 30th in a three-team round robin with Lincoln-Way East and Glenbard East with games at 10, 12:30 and 2 p.m.

“There’s certainly a lot of excitement, and these games put some wind into the coaches and players’ sails,” Hurry said. “We’re ready to go and just waiting for when it will happen. We went out to [our] field and saw dirt. It was very, very saturated.”

For Chicago Christian baseball coach and athletic director Eric Brauer, no game Monday afternoon will certainly be an odd feeling. The last three years the Knights opened the season, sometimes in frigid temperatures, against Bloom.

Courtesy of the weather forecast and the field conditions, Brauer canceled his team’s first two games, versus Bloom and Rich South, early last week. Brauer and his team shoveled the snow off the field only to have an additional snowfall cancel their work.

“It’s tough to concede being in the gym for two more weeks, but you’re at the mercy of Mother Nature,” Brauer said. “The kids know we’ll be out there when we can. The IHSA won’t extend the season so we’ll make the best of what’s available.”

Brauer does expect the Knights to play two games this Saturday when the team travels to Jacksonville, going up against Midwest Central and Valmeyer.

Her goal was simple, reminders of why they love to play after being cooped up inside for weeks.

“We were out there about an hour, and I just wanted them to enjoy it,” Pawlicki said. “Fly balls, taking grounders, throwing some, just soak up the weather. Make it enjoyable after all the frustration of being inside.”

With the threat of countless cancelations and makeup games, Pawlicki says the focus will be getting all the conference games in. But in May, with hopefully good weather, be ready to play early and often.

“Come May, we want to hit the ground running,” Pawlicki said. “For now, keep watching the weather and know everyone is affected. Everyone wants to get outside.”