Loyola’s offense has been clicking all season. But what will the Ramblers do defensively against Jahlil Okafor and Young? Joe breaks down possible Loyola strategies, the common denominator of state champs and Glenbard North’s surprising run. 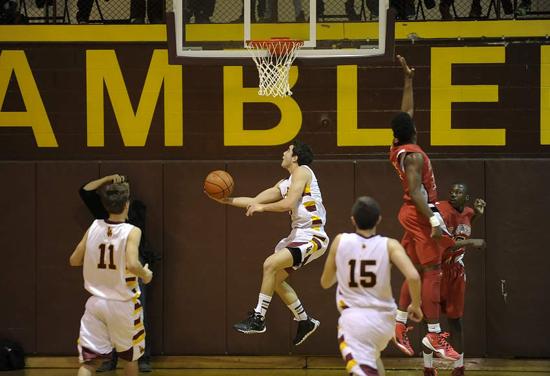 It’s not exactly David vs. Goliath, but there won’t be a more intriguing coaching strategy to follow than Loyola’s Tom Livatino against Young at Chicago State. Just what will — or can — the Ramblers do with 6-10 Jahlil Okafor, the nation’s No. 1 player and nightmare matchup?

Okafor scored 35 points and had 13 rebounds in the sectional final win over St. Rita, a team with an athletic 6-8 Myles Carter and other long, rangy athletes. Loyola, a disciplined, sharpshooting, guard-oriented team, has little size and lacks ideal athleticism and length.

“It’s so difficult because his game has expanded so much,” Livatino said of Okafor. “You try and limit him, but at what expense? They have more size than us across the board. It starts with Jahlil, but it continues on down the line.”

The common phrase among college coaches is “you need pros to win a national championship.” In Illinois high school hoops, you need Division I talent to win a big-school state championship.

Without Division I talent (preferably at least two Division I players), you’re most likely not going to win a state title in 3A or 4A.

Want proof? In the past 30 years — a total of 36 state champions, including 3A and 4A champs the past six years since the state expanded to four classes — every big-school state champ, with the exception of three teams, have had at least two Division I players.

Glenbrook North (4A) in 2005 and Rock Island (3A) in 2011 each had one Division I player, but they were special ones in Mr. Basketball winners Jon Scheyer and Chasson Randle, respectively.

The lone state champion that has defied the odds is 2012 Class 3A champ Peoria Central. The Lions had one nondescript Division I player: Trey Kellum, who is playing at Florida A&M.

Every Chicago-area team playing in a 3A and 4A supersectional is a known commodity — except Glenbard North.

And then there is Glenbard North.

But what they can hang their hat on is their ability to win close games. Glenbard North has won four state tournament games by three, four, three and three points. In three DuPage Valley showdown wins over West Aurora and Naperville Central, the Panthers won by a combined five points, including a pair of last-second shots.