Dundee-Crown has joined the ranks of area schools looking for new head football coaches after Vito Andriola resigned to take over the same position at Grant. 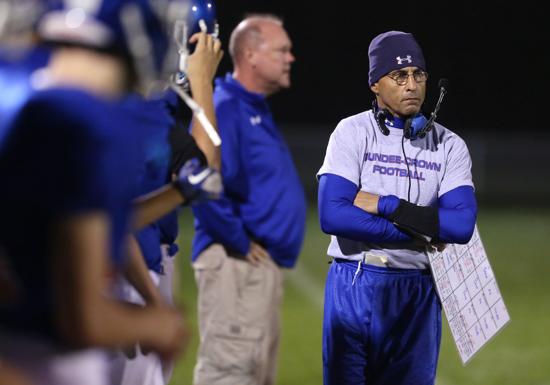 Dundee-Crown head coach Vito Andriola on the sidelines during the second half of a game against Grayslake Central. | John Konstantaras/For Sun-Times Media

Dundee-Crown has joined the ranks of area schools looking for new head football coaches after Vito Andriola resigned Thursday to take over the head coaching position at Grant High School.
Andriola, who was named Courier-News Coach of the Year for 2013, took his team to a 6-4 record that included the team's first state playoff berth since 1994. It culminated a three-year turnaround of the struggling Chargers program.
"Emotionally,  it was very tough telling the team and it was tough for them, too," Andriola said. "When you put in that much work together and have been through so much, it always is.
"They were willing to do the work and saw the benefits and I was proud of them and what we accomplished here."
Grant's school board approved the move to make it official at its monthly meeting Thursday night.
D-C went 0-9 in Andriola's first season after taking over for Mike Davis.
Then the Chargers ended a 26-game losing streak with a 54-12 win over Elgin in the 2012 opener, and went on to a 3-6 mark before finishing 6-3 in the 2013 regular season. The Chargers lost their 2013 Class 8A playoff game 35-13 to Oak Park-River Forest.
Andriola takes over a Grant program that has achieved Class 6A playoff berths each of the last three seasons under former coach Kurt Rous, who had been at the school as head coach from 2006-07.
It's a bit of a switch for Andriola, who has had a reputation for taking over struggling programs and turning them around. In 2001 he became Grayslake's head coach and they went 2-7, 4-5 and finally made the playoffs in 2003-4 with an 8-3 season. He finished 16-22 at Grayslake, then served as defensive coordinator at Glenbrook South from 2005-10. The Titans missed the playoffs eight straight years prior to Andriola’s arrival, but qualified for the postseason every year he was there.
"It's exciting, and a lot of that is the success they have already had there," Andriola said. "Their facility is excellent there and that is part of the draw."
Grant has Field Turf at its football stadium.
"We're going to be getting new practice fields, too. The football field and practice fields weren't the best here."
Andriola will be able to work in the weight program at Grant with his new team and he'll be a physical education instructor at the school.
Andriola sees the D-C program as one that can continue to succeed in the tough Valley side of the Fox Valley Conference.
"I believe they are a playoff team next year," Andriola said. "They're a five- to seven-win team.
"It's up to them to make the effort again, but they have the talent."
The other area schools also without head coaches are Larkin, Hampshire and St. Charles East.
Larkin athletic director Mark Ribbens has reduced the candidates list to three "who would all make excellent coaches," he said.
Ribbens said an announcement would likely come later in April and that he had applicants from a wide range of locations, including Alaska.
Hampshire's hiring of Matt Cavanaugh's replacement could come much sooner after three rounds of interviews.
"I sent the recommendation to the school district office and they have it now," Hicks said. "It's a matter of the board addressing it."
St. Charles East's job came open Tuesday when Mike Fields resigned after five years as head coach.