After blanking Round Lake on Monday, Rachel Effa and her Grayslake Central teammates shut down Waukegan 3-0 and Grant 1-0 on Tuesday to win the four-team, round-robin tournament with a 3-0 record. 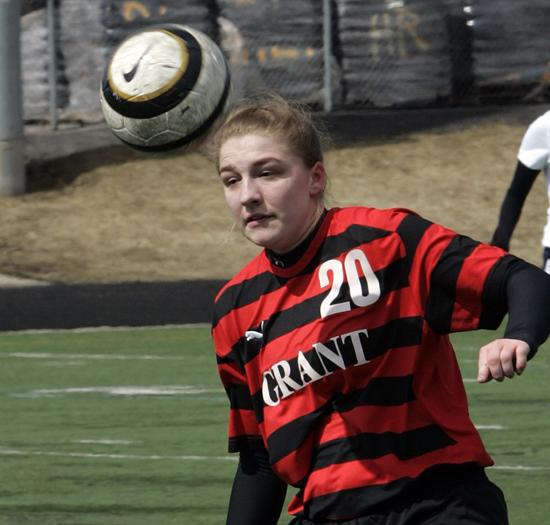 If an MVP was named for the Grayslake Central spring-break girls soccer tournament, it would have gone to the home team’s keeper, Rachel Effa.

After blanking Round Lake on Monday, Effa and her Rams teammates shut down Waukegan 3-0 and Grant 1-0 on Tuesday to win the four-team, round-robin tournament with a 3-0 record.

But while Effa obviously was at the forefront of the tourney success, she didn’t do it alone.

Grayslake’s back line of Lauren Spaulding, Anna Sizelove, Aly Hamrick, Carson Sparkman, and Laura Quandt excelled both days, and the keeper was quick to praise her teammates.

“Our defense has stepped up,” Effa said. “With the graduation of Savannah Mudd last year, they have really stepped up a lot.

“They talk a lot. They’re very vocal. They move when then they need to. They work well together. It makes my job a lot easier.”

Russ is without the Wollmuth triplets (Mikala, Rebecca, and Sabrina), who were a key part of a young core for the Rams last year, and are playing club soccer and running track for the school this spring.

“Our defenders were strong the whole tournament,” Russ said. “There are always going to be a few breakdowns in a game, but they were able to sort it out quickly.

“They work really well together.”

In the 1-0 win over Grant, the Rams’ goal was by Emily Werfel in the first half.

“We created so many opportunities to score. It’s always exciting to see whether you can finish or not, and there are always going to be chances that you miss,” said Russ. “We’re getting there with many different people and creating those chances. We’ll get to finishing them. It’s early in the year, but we’re excited about where we’re at at this point.”

Grant went 2-1 in the tourney and coach Michael Kenney knows his young team is going to get better each time out.

“It was an exciting game,” he said. “We’d rather be on the other end, but seeing what my freshmen are capable of and how everybody is coming around, it was a great experience, especially for the younger girls. It was good to see them battle a quality team like Grayslake Central.”

Grant has five freshmen in its lineup but the group played solid soccer throughout.

“It was good to see the composure from our freshmen too, out there on the outside mid not freaking out, just keeping their cool and possessing the ball,” Kennedy said. “It’s going to be a fun group to work with.”

Round Lake went 1-2 in the tourney and Waukegan was 0-3. The Panthers beat Waukegan 2-1 in a shootout on Monday.