Elgin’s Jennah Perryman will be headed to the University of Missouri-St. Louis next year. But before that, the power-hitting pitcher hopes to carry Elgin to a UEC River title. 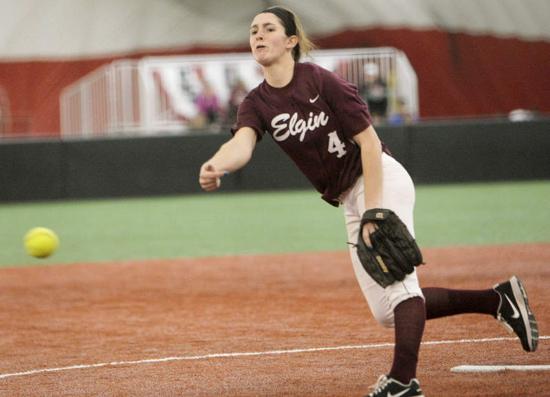 “The thing that stands out about Jennah,” Levin said, “is that she is tenacious.

“She wants to beat her opponent on every pitch and she’s a tremendously gifted player. We’re extremely fortunate to have her coming to play for us.”

Perryman, a power-hitting pitcher and shortstop for the Maroons and a Courier-News All-Area player last year, didn’t take a direct route to Levin’s program.

Perryman was slated to play for Ball State and coach Craig Nicholson before Nicholson left the school to take the head coaching position at Arizona State.

Nicholson offered Perryman a spot on the ASU roster, but she declined.

“Arizona is just a little too far from home, and Missouri-St. Louis is second in the nation in criminology, which is the major I want to go into,” Perryman said. “Plus, my sister is going to be there, so it all worked out.”

Jennah Perryman won’t be following quite the same path as her sister, however.

“I see myself playing short and third base and pitching every so often in college,” Perryman said. “Hannah is mainly a pitcher and plays a little first base.”

Perryman was a unanimous All-UEC River pitcher and third baseman for 14-14 Elgin last year. She had a 1.67 ERA with 125 strikeouts in 109 innings, and averaged 8.02 strikeouts for every seven innings pitched.

Perryman will move from third base to shortstop this season when she isn’t pitching for first-year coach Nick Bumbales.

“She’s a five-tool kid,” Bumbales said of Perryman. “She has a fantastic arm, she hits for power and I think she’s more comfortable at shortstop. She’s an elite kid.

“The thing I’m most impressed with is the leadership role she has taken on this year. It’s like having another coach on the team.”

Perryman and fellow seniors Anna Eckholm and Kelly Bremer are aiming to lead this year’s Maroons against another tough crop of teams in the UEC River, including Bartlett, St. Charles North, and last year’s Class 4A state runner-up, St. Charles East.

“Me, Kelly, and Anna have all played on the same travel team and it just kind of worked out that we’re all being asked to lead,” Perryman said. “We’re all contributing.

“I think we’ll be pretty solid this year. We have some different position players that can play two positions so I’m looking forward to the season.”