Defending Class 4A champion Mount Carmel returns a veteran core to make a push for a second consecutive title. 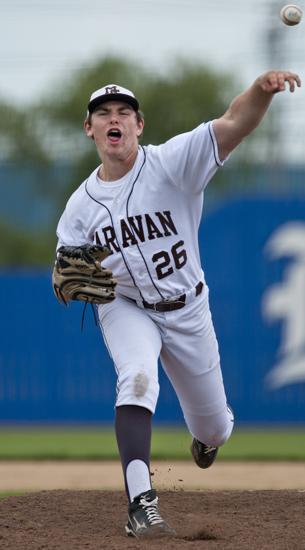 Having amassed 412 victories over 14 seasons as head coach at Mount Carmel, including four state appearances, Brian Hurry certainly has established himself as one of Illinois’ most successful baseball coaches.

In his own school, however, Hurry and his program have been cast somewhere in the shadows behind the vaunted Caravan football program.

Last June, the baseball program finally broke through to win the school’s first state championship by defeating Libertyville 2-1 in the Class 4A title game.

“Whatever street cred it gave us, it was old news quick because the football team won another state championship in the fall, their second straight,” Hurry said with a laugh.

Although the baseball program won’t surpass football’s 11 state championships any time soon, Hurry and Co. are in position to match back-to-back titles this spring. On paper, the Caravan are even better than last year’s 34-8 squad, one that became the first Catholic League team to win it all since 1976.

“The biggest hurdle? I guess I can say the whole Chicago Catholic League, but it’s really us,” senior ace left-hander Marko Boricich said. “We know what we have. We just have to go forward as a humble team, go hard, and play at coach Hurry’s energy level.”

Boricich is the embodiment of Mount Carmel. The 6-1, 190-pound Penn State recruit will be competing for his fourth state championship in two years, having earned two in football, the second of which he was the starting quarterback. As a junior, Boricich posted an 8-1 record with a 0.96 ERA.

Shortly after leading the football team to the state championship, he began a strict throwing program and experienced a significant velocity jump. In the winter he pitched in the upper-80s, a 7-8 mph spike.

Boricich assumes ace responsibilities from Jeremy Kravetz, who is now a freshman at Kansas.

Kravetz, Boricich and senior left-hander Richard Fordon, who’s signed at Northwestern, were the only Caravan players who threw a pitch during the playoff run. Junior right-hander Nelson Munoz should also factor into Mount Carmel’s deep pitching rotation this spring.

The younger Houston possesses an exciting array of tools and is one of the top prospects in the state’s Class of 2016, along with catcher/third baseman A.J. Lewis.

“The strength of the team is our overall balance,” Hurry said. “We have a balanced lineup and have more depth than we’ve ever had. We’re a very athletic, very fast team. We’re not going to be one-dimensional. We can put pressure on defenses.

“We’re as hungry as ever. We can’t wait to get after it again.”