Pat Disabato breaks down his top Southland teams and individuals as the 2014 baseball season gets under way. 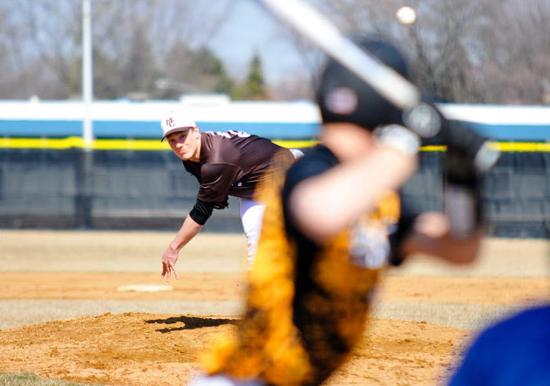 The good news is that once Mother Nature cooperates, local fans will be treated to exceptional talent, both from individual and team standpoints.

More than two dozen local players already have committed to Division I college programs. From Notre Dame to Louisville to Penn State, colleges are realizing the amount of talent in the Southland.

With so much talent across the area, it was a difficult decision to arrive at consensus preseason No. 1. However, when all was said and done, defending Class 4A state champion Mount Carmel earned the honor.

The Caravan returns five starters and four pitchers with a great deal of experience from last season’s 34-8 club.

Here’s a look at our Top 10 (last season’s records in parentheses):

“We have to keep the kids grounded and focused,” coach Brian Hurry said. “We tell the kids to ‘avoid the noise.’ It’s not where you start, it’s where you finish.”

“We have a deep pitching staff and lineup,” coach Mike Zunica said. “We won the summer state championship. We believe we can win it all this spring.”

The Eagles starting rotation is scary good, with senior right-handers Bryan Pall (Michigan), Sean Leland (Louisville) and Matthias Dietz (Logan J.C.) all with pitching arsenals that can dominate the opposition. Junior Alec Martinez, who will start in the infield, provides depth on the mound.

Seniors Dan Santiago, Julian Gutierrez and Chris Stearns give the Eagles reliable gloves in the outfield.

“Making the routine play and competing at the plate will be the keys,” coach Jim Morsovillo said. “With the pitching staff we have, we should have the opportunity to compete late into ballgames.”

The Vikings return a bevy of talent from last season’s squad, led by SouthtownStar 2013 Player of the Year Mike Kornacker (Purdue), a major producer on the mound and at the plate. Senior shortstop Brad Wood (Northern Illinois), catcher T.J. Marik (Austin Peay), first baseman Roger Wilson (St. Francis) and infielder Nate Tholl, along with second baseman Kornacker, compose an infield that will rank among the elite.

The pitching staff has the ability to shut down most opponents with the hard-throwing Kornacker and Wood leading the way.

“With the number of players back, we should have the experience to compete for the CCL (Chicago Catholic League) Blue title and, hopefully, for a state championship,” coach Pete Lotus said.

Is this the season the Indians make a run to the Class 3A title? Quite possibly. Pitcher Jake Latz (LSU), a southpaw, and catcher Mike Papierski (LSU) are top-notch batterymates headed to college together. Senior Charlie Wright (Joliet Junior College) and sophomore Garrett Acton add considerable promise to the pitching staff.

“We definitely have an impressive team on paper, but we have to make sure we play to the best of our ability,” coach Brian Storako said.

The defending Class 3A champion Hilltoppers have reloaded for another run at state glory.

The pitching staff has the making of a dominant one, with Dalesandro, Drake Fellows (Vanderbilt), Kyle Polaski (Palm Beach Atlantic) and Brady Kostecki (Roosevelt) toeing the rubber.

The biggest question that needs to be answered is behind the plate.

“With the number of returning players from last season, we stack up with the top teams in our area and conference,” coach Jared Voss said.

No team lost as much talent to graduation as did the Phoenix. However, there’s plenty of talent left in the cupboard for first-year coach Mitch Nowicki.

“Defensively, we’re going to be very athletic but lack big game experience,” Nowicki said. “Offensively, we have improved power, but again, lack varsity at-bats. I like our pitching depth.”

The Celtics boast the area’s hardest thrower in senior Jake Godfrey (Notre Dame) and a major run-producing force in senior Phil Kunsa. Godfrey consistently is in the low 90s (mph) and has reached 94 on occasion. On most teams, senior Dylan Rosa would be an ace. He’ll have to settle for No. 2 behind Godfrey. Senior Rich Yusa looks to make an impact after missing the 2013 season because of an injury.

Keep an eye on sophomore infielder Mike Madej, a speedster with a solid stick.

If Providence is going to live up expectations, a group of untested players must produce.

“We have a senior dominated team with some juniors and sophomores sprinkled in,” coach Mark Smith said. “Pitching and defense will have to be our strengths.”

The Vikings have two of the most promising juniors in the area in pitcher Jeremy Orbik (Kentucky) and left-handed-hitting catcher Jesse Forestell. Orbik consistently hits the upper 80s (mph) and Forestell is a major force at the plate, as well as behind it.

Senior shortstop Kendall King has unlimited range and a strong arm. Senior Isaac Cutrara will log double duty in the infield and on the mound, as will junior James Sheehan. Keep an eye on junior Bryce Gray, who could be ready to emerge.

The Vikings suffered a big blow, however, when senior outfielder Quincy Jones suffered torn labrum and will be out for the season.

“We have a real nice blend of talented seniors and juniors,” coach Todd Sippel said. “We feel we can compete with anyone this season.”

The Olympians’ 1-2 pitching punch of seniors David Dugger and Justin Freeman (Southern) has the means to dominate. Dugger has won 13 games over the past two seasons, while Freeman, son of former major leaguer Marvin Freeman, was 6-1 with a 1.14 ERA. Offensively, seniors Michael Hoover, Demetrius Todd and Dugger lead an attack that boasts good speed and power. Senior catcher B.J. Faulkner, a transfer from Mount Carmel, should nicely fit in the middle of the order.

“The players have high expectations,” coach Corey Stallings said. “The key is to keep improving defensively. I feel we have the experienced arms that will help us compete throughout the season.”

Tyler Banovich, Bremen, Sr.: Hits for average, power and can run. Also has ace stuff from the mound.

Jesse, Forestell, Homewood-Flossmoor, Jr.: Left-handed-hitting catcher can rake and is proficient behind the plate.

Mike Kornacker, St. Laurence, Sr.: Reigning SouthtownStar Player of the Year can hit for average and power, and can dominate from the rubber. Purdue recruit.

Josh Stowers, Mount Carmel, Jr.: A physical specimen who has big power, major speed and a gun for an arm. Louisville recruit.