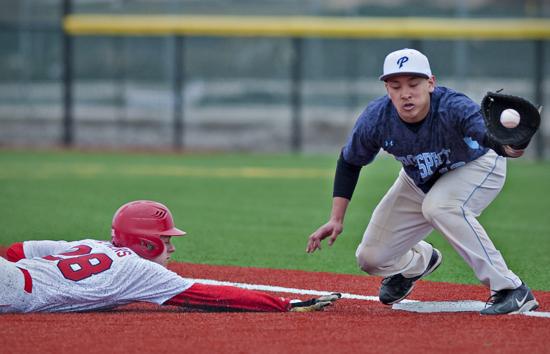 Prospect's baseball team went outside for only the third time Friday, but that didn't matter to senior second baseman Grant Gerdes.

Gerdes had two of Prospect's three hits and scored the first run of the season in the bottom of the first inning as the Knights beat Hinsdale Central 2-0 at Heritage Park in Wheeling in the opener for both teams. The loss spoiled the debut for new Hinsdale Central coach Jason Ziemer, who formerly coached at Proviso West.

Prospect's other run came in the second inning when designated hitter Jack Courtney scored on a passed ball with two outs.

"I've been seeing [the ball] really good," Gerdes said. "I got new contacts. That seems to be going a lot better."

Hinsdale Central senior right-hander Austin Butler threw 46 pitches in the first two innings, but settled down to work four innings on the mound. He did not allow an earned run.

"Honestly, I thought we hit the ball better than they did today," Ziemer said. "I told our guys, 'The key to the game is throw strikes, pick up the baseball and put the ball in play.' "

Prospect and Hinsdale Central combined for five hits. Prospect hit only one ball out of the infield, a fly out to right field in the sixth inning. The Devils managed only singles by Chris Botsoe in the first inning and by Max Peters in the second.