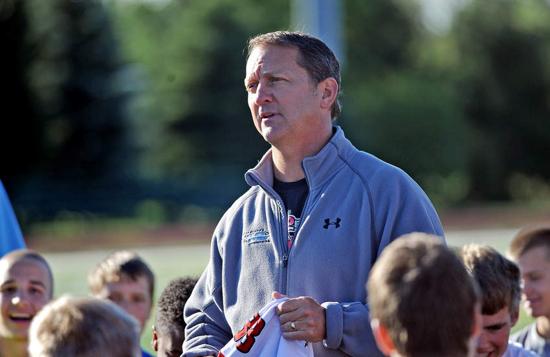 Beebe, who played in six Super Bowls in nine NFL seasons, is now Aurora Christian’s offensive coordinator. High-profile college recruits, including transfers, helped put the spotlight on Beebe when he was the private school’s head coach.

“It wasn’t until the state championship game and we won that I heard that I was recruiting,” said Beebe, whose Eagles reached the state title game and lost in his fifth season in 2008, but then won back-to-back Class 3A state titles in 2011 and 2012. “People always try to tear down success.”

Beebe's House of Speed, started in 1998 following his retirement from the NFL, also has faced recruiting rumors. His speed and strength-training methods are taught to athletes from youth to the professional level. There are now House of Speed franchises in 11 states.

“The IHSA several times has looked at me [and the business],” he said. “They’ve sat in our meetings, been to the camps and never once found anything illegal. The last thing I need is to be found violating a rule. I’ve disclosed everything to the IHSA.”

In fact, Beebe pointed to the father-son duo of Ken and Derek Leonard — who coached Springfield Sacred Heart-Griffin (5A) and Rochester (4A) to respective state titles — as “running House of Speed stuff because it’s a great way to teach football.”

“Here’s a conclusion,” Beebe said. “It’s sad to say, but this is never going to go away. It’s like refereeing a basketball game. Every call you make, somebody in the stands doesn’t like the call. There’s always going to be somebody who doesn’t like what the IHSA is doing.”