In the fall, senior De La Salle's Khalia Powell finished in the ninth-to-12-place slot in the IHSA girls tennis finals despite being unseeded, which was the highest finish in school history. Now in the spring, Steven Hill will take aim at school history on the boys side. 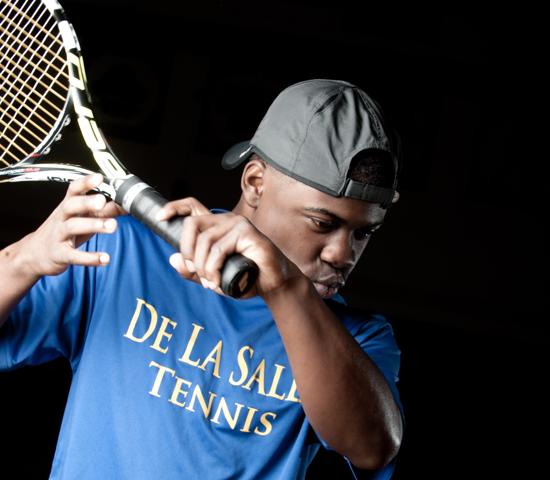 De La Salle has been blessed by having two of the best tennis players in school history in the same graduating class.

In the fall, senior Khalia Powell finished in the ninth-to-12-place slot in the IHSA girls tennis finals despite being unseeded, which was the highest finish in school history.

Now in the spring, Steven Hill will take aim at school history on the boys side. Jason Buegel finished sixth in 2000 to set the mark.

Hill will have to put together a monster run in the state tourney for that to happen but he’s played 14 downstate matches in a prep career that started at Lincoln-Way North for two years and has ended up at the Chicago school after moving from Frankfort to the Morgan Park/Beverly area.

Hill is not making any predictions on where he will finish, but said he would be  “going in with the tenacious mindset that I usually have.’’

Hill said his “swiftness around the court” is a strength of his game but he wants to improve on his backhand and to keep his emotions in check.

“I get real stirred up,” he said. “When that happens, it gets a little hectic up top. I’ve never been thrown out of a match, but I’ve gotten a good amount of warnings. I usually get the message and try to tone it down.”

“I find Steve to be a very hard working and focused young man who wants to do well in both the classroom and on the tennis court,” he said. “I’ve enjoyed coaching Steve and look forward to him having a very successful year though he does have his work cut out for him having to play against some top-notch competition this season in the Catholic League.”

Hill grew up in Chicago and developed a love for tennis that started with a Clissold Elementary School after-school program called Love to Serve. A few years later, he loved everything about the game and chose to pursue it over basketball.

“I started out as a basketball player and I was pretty good,” he said. “I wasn’t bad on the court but when I was on the bench, my attention went everywhere. I was cool when I was in the game. But when it was time to sit down, my thoughts were everywhere. In tennis, you are always in the game. I needed a sport like that.”

He said he is getting a lot of Division III looks and a few nibbles from Division I schools including Howard. Hill said he would wait until after the season to see where his future school will be.

It’s no surprise that two of the better players in De La Salle  history know each other well. Hill said he respects Powell but has never been beaten by her.

“I grew up playing tennis with her – I’ve known her for a long time,” Hill said. “She doesn’t beat me. I don’t want to lose to a girl but if she ever did beat me, I might start cheating.”