Paying the price for glory

Sun-Times Media examines the IHSA's newest wrinkle to the multiplier that will move several private schools up in class for the state playoffs. 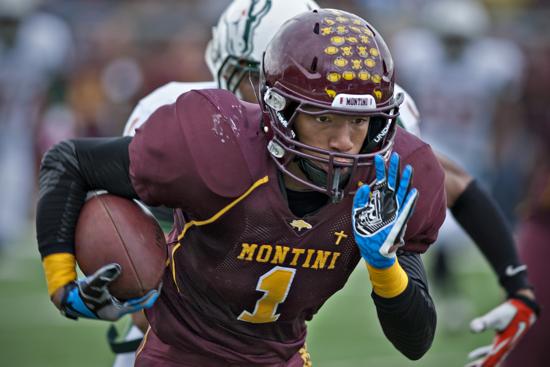 Leon Thornton III (1) and his Montini teammates will be affected by the IHSA's success advancement factor after its recent dominance in Class 5A. | Jon Cunningham/For Sun-Times Media

Leon Thornton III isn’t going to get mad about the latest obstacle in his path.

Instead, the Montini junior plans to get better.

“We’re always excited for a new challenge,” said Thornton, a member of the Broncos’ football team that lost in the Class 5A final last season to end a run of four consecutive state titles. “Whether we’re 5A, 6A, 7A or even 8A, we still have to work hard to redeem ourselves from last year.”

Thornton and the rest of his teammates will be arguably the highest-profile program affected by the success advancement factor approved in February by the Illinois High School Association board of directors.

Montini has one of the top mid-sized football programs in Illinois with a 70-12 record and five state trophies since 2008, all in 5A.

But the Lombard school, with a current official enrollment of 667 — 1,100 with the 1.65 multiplier — is moving up beginning this fall. Per the success factor guidelines, the Broncos will play in 6A this fall and 7A in 2015. If they reach the finals in those classes both years, they will play in 8A in 2016.

The smallest enrollment for a 7A playoff qualifier last fall was 1,966; for 8A, it was 2,459. So Montini will be the smallest fish in increasingly bigger ponds going forward, which Thornton and his classmates are OK with.

“No one was upset,” he said. “We are all actually happy that we could get a crack at the quote-unquote bigger boys.”

His coach, Chris Andriano, feels pretty much the same way.

“I don’t really worry about it,” Andriano said. “We’re just going to play. ... We’ve been ready to move up anyway. We were wanting to be in 6A to see how we could do.”

And the veteran coach is prepared to keep climbing the ladder as mandated by the new rule.

“I want to win 8A,” he said. “We’d love to be able to play with the big boys and see if we could win. We have a long way to go to win one of those, but we like the challenge.”

Montini’s wrestlers have been even more successful than the football team, winning seven consecutive state titles. That run began in Class AA, the largest grouping in the old two-division system, and has continued in 2A under the current three-class format. Next season, the Broncos return to the largest class, 3A.

“I think we’re more than ready,” junior Luke Fortuna said. “We wrestle national-level competition [during the season]. It’ll be nice to have that at the end of the year.”

Other athletes facing a bump up in class are taking a similar approach.

Andrew Blechman and his North Shore Country Day teammates will go from 1A to 2A in boys golf after winning team titles in 2011 and ’12 and taking second last fall.

“I don’t think anything should come easy,” said Blechman, a junior. “From my standpoint, I’m always looking to play against better kids in the state. I’m looking forward to being pushed and to try to get back to the state tournament, this time in 2A.”

Also embracing the challenge is St. Francis junior volleyball player Molly Haggerty, whose team goes to 4A after winning back-to-back state titles in 3A.

“I’m definitely excited,” Haggerty said. “Our only three losses last year were to [4A champ] Mother McAuley, so hopefully we can get some revenge.”

But St. Francis girls volleyball coach Peg Kopec, whose teams have won 10 state titles since 1988 but also failed to get past the sectional in 2009 and ’10, does have reservations.

“What I don’t agree with is the four-year thing,” Kopec said, referring to the timeframe that triggers the success factor. “I don’t think it’s fair. You can have a group of kids who are very successful, but then the next group is penalized while the other group is long gone. I can see maybe two or three years.”

Schools like Montini, North Shore and St. Francis all can move up. But some other private-school powers already are competing in the top classes because of their enrollment and the multiplier. That includes Loyola, which has been to two 8A football finals since 2011, and Mount Carmel.

The Caravan are the defending 4A baseball champs and have won two consecutive football titles, in 8A in 2012 and 7A last season. Mount Carmel is usually on the border between 7A and 8A in football, but before last year hadn’t been in the smaller class since 2005.

“I don’t think it affects us very much at all,” Mount Carmel football coach Frank Lenti said of the success factor. “I worry more about the medium-sized and the smaller schools.”

Like some other coaches at private schools, Lenti does have concerns about adding the success factor on top of the multiplier — especially when the former doesn’t apply to public-school powers.

“How do you justify that Rochester has won two, three, four [state football titles] in a row [and] there’s no  success [factor] for them?” Lenti said. “What does this have to do with the makeup of private schools? The multiplier alone is ridiculous.”

Another coach who doesn’t like the new rule is Leo’s Ed Adams, who has guided the Lions to six boys track and field state titles since 1995. Leo’s last two championships came in 1A in 2011 and ’12, meaning the Lions will go up to 2A in 2015.

“First of all, Leo and myself, we love being in the IHSA,” Adams said. “But I also want to say I was extremely disappointed with their decision to implement the success factor. ... I don’t think it was well thought-out.”

Adams pointed to examples of athletes who didn’t even start competing till after their freshman year at Leo — and still won state titles.

“Does the state want to go to a [separate] private, public state series in various sports?” Adams said. “I don’t know.”

“If they want the private schools out [of the IHSA], I wish they would say it.”