Romeoville’s Miguel Rayos Del Sol won the Bremen Tournament singles title for the second year in a row and led Romeoville to the team title with 129 points on Saturday. 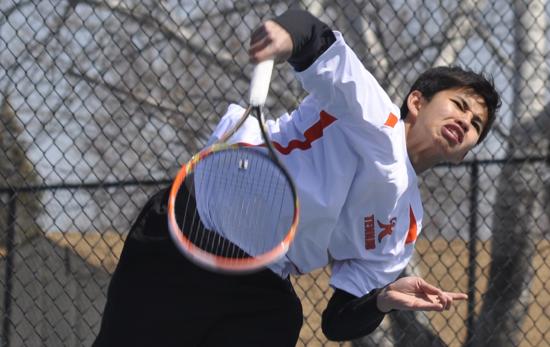 The Spartans sophomore won the singles title at the six-team Bremen Tournament on Saturday afternoon and led Romeoville to the team title with 129 points.

For the second year in a row, Rayos Del Sol won the tournament’s singles crown, but this time he earned the trophy despite losing to Sterling, 6-3, during his final match of the day.

The format for this round robin tournament was that a match consisted of nine games and total number of game victories factored into the championship. Rayos Del Sol won his four other matches and outscored his opponents by a combined score of 36-0 and earned 39 points total. Sterling, also a sophomore, finished 5-0, but he finished with 37 points because he beat two other opponents 7-2 — one opponent 8-1 and one 9-0.

“I tell our players that every game counts in a format like this,” said Spartans coach George Joyce, whose team won the Bremen title two of the last three years. “You have to play hard every game.”

“It was a pretty good day but that last match was tough,” Rayos Del Sol said. “My game didn’t show up in that last match. I wish it did, but he played really well.’’

Veteran Rich Co-op coach Mike McCarthy said it’s been eight years since he’s had a boys tennis player go to state and last year Sterling, who attends Rich Central, came close. In sectional quarterfinal action, Sterling said he had momentum in a match against Lincoln-Way Central’s Ryan Champlin but earlier bad weather in the day and darkness forced postponement of the match. When it resumed the next morning, Champlin put the finishing touches on a 6-4, 2-6, 6-2 victory.

“I still gave it my all when I played the next morning but I just didn’t have it,” Sterling said. “I really want to make it to state this year.”

McCarthy said Saturday’s victory over Rayos Del Sol was a quality win and people will soon start to take notice of Sterling.

“Frank is a throwback,” the coach said. “If you ask him to run through a brick wall, he’ll ask ‘how many times coach?’ He has something in him that champions have.’’