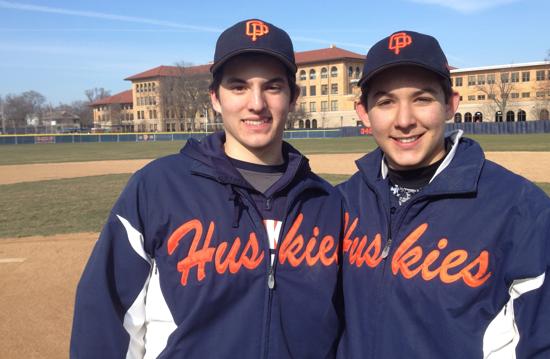 They live across the alley from each other and can see each other’s house looking out a window.

It was a rare baseball season of the cousins being unable to compose the same battery.

But it was back to business for the Rumoros during OPRF’s season-opening trip over spring break last month to Florida. One game when Chris Rumoro entered as a reliever, he pitched to cousin behind the plate.

In Saturday’s first game of a doubleheader against York in OPRF’s home opener, the cousins were back on familiar ground.

But who takes the blame when Chris Rumoro issues a home run? In an 8-2 loss to York, he gave up a three-run shot to catcher Seth Dvorak in the top of the sixth inning.

It was his cousin behind the plate who relayed the signal for a fastball that came from assistant coach Wayne Wente in the dugout.

“I can’t do anything about it,” Chris Rumoro said. “It was a full count. I threw a strike and the kid got into it.”

Patrick Rumoro hit his own three-run homer in the second game, a 6-1 victory. He blasted a 1-0 offering from Mitchell Miner over the left-field fence in the fourth. After the game, Chris Rumoro claimed he predicted his cousin would hit a home run.

“I was telling him before the at-bat that he’ll hit a homer,” Chris said. “I’ve said it four times and he has hit it out three times.”

Patrick Rumoro hit two homers during the four-game Florida trip. He is developing into one of the Chicago area’s top college prospects for the Class of 2015. Before the season, he was ranked No. 40 in his class by Prep Baseball Report, while Huskies’ third baseman Ryan Fish was No. 46.

The Huskies (3-4, 1-1 West Suburban Silver) are scheduled to play five games this week and will face Lyons three consecutive times from Friday through Monday.