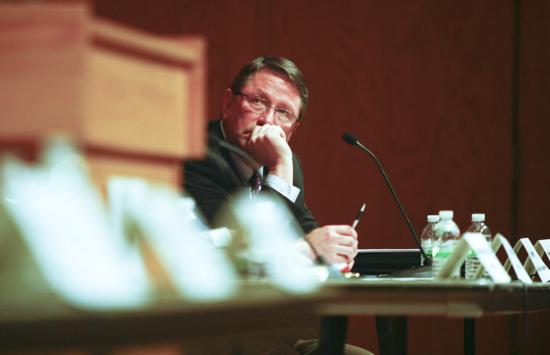 ''All of a sudden, it seemed as if it was one thing or another. Every day there was a new crisis,’’ IHSA Executive Director Marty Hickman said. | Sun-Times Media Library

It has been a rough winter in more ways than just the weather. The high school sports scene has seen more than its fair share of storms.

‘‘About six weeks ago we were sitting around here thinking, ‘Wow, things are calm,’?” Illinois High School Association executive director Marty Hickman said. ‘‘Then, all of a sudden, it seemed as if it was one thing or another. Every day there was a new crisis.’’

Ineligible players. Violations with game schedules. Open-gym violations. The parent of a player suing her school. A coach accused of blatant illegal recruiting. An overturned ruling on Stevenson guard Jalen Brunson that nearly halted the Class 4A third-place game in boys basketball.

That said, Hickman still saw more good than bad as he addressed a variety of topics in an extensive interview with Sun-Times Media.

On Homewood-Flossmoor’s girls basketball team being ousted from the state tournament because of club participation and open-gym violations:
‘‘It was very difficult to take a team out of the tournament, but in that particular case, it was my conclusion those kids had gained an advantage by what had gone on. We felt like in fairness to everybody else who had played by the rules, it wasn’t fair to let H-F continue.’’

On the decision to ban and then reinstate Bogan, Hyde Park and Uplift after a second look at scheduling violations:
‘‘The thought process was that, in reality, they didn’t gain an advantage. They had one more regular-season game than they could have on their schedule, but they hadn’t maxed out the games they could play in the tournaments. So there were going to be teams in the tournament that played as many games and probably more.’’

On why Phillips didn’t get that break last year after being ousted for playing too many tournaments:
‘‘Up until now, our procedure had been to take teams [with scheduling issues] out of the tournament. Well, we’re going to look at that differently based on the board’s action, and we’ll evaluate it with a different criteria going forward.”

On whether he agreed with the decision by the IHSA board of directors to overturn his suspension of Brunson:
‘‘The board made their decision, and I respect it. I still am very comfortable with the decision I made. I can only speak for me. What I felt I saw were two pictures from two different angles that seemed conclusive there was a gesture used that was unsportsmanlike and inappropriate. I was convinced and continue to believe he made a gesture and that it warranted consequences. Now, for whatever reason, the board saw it differently. That’s OK. These are great folks, and we’ve disagreed before. That’s how it works. We have an appeal process.’’

On the IHSA possibly cracking down on high school coaches being involved with club teams:
‘‘It’s certainly an idea that might get put forward based on experiences we’ve had the last couple of years. But that’s something that’s going to have to come through the membership, and we won’t know if that’s going to happen until the fall.’’

On future changes in the IHSA’s transfer rules:
‘‘It comes up annually, and that’s why you’ve seen changes. Obviously, it’s high on the agenda of the membership to continue to work on the transfer rule because people have seen abuses and the need to do things differently. I expect we’ll see continued tweaking by the membership in an effort to stem the transfers we’ve seen and probably limit participation opportunities in some situations. There is. ... talk about limited eligibility for underclassmen who transfer along the lines of, ‘Transfer, fine, but you wouldn’t have eligibility during the state series.’?”

On whether the IHSA should just let kids go where they want for athletic purposes:
‘‘Athletics are an important part of the high school experience, but they’re secondary to the educational experience. I don’t think we want kids making decisions on where they might go to school based on the athletic program at the school. That’s just going to create additional headaches. It’s not to say it’s not already happening. It is. ... But anything that would encourage that or make that easier, I don’t think it will be well-received by our membership.’’

On thoughts of splitting private and public schools into separate state series:
‘‘There isn’t any serious discussion of breaking things out into public and private championships like we’ve seen in states like Texas and New York. We don’t have that discussion going on, and I’m happy about that. I just think as reasonable people we can get along, and we can compete and do a good job of providing a level playing field without getting to the point where you’d have separate championships.’’

On why the new success factor rule won’t be applied to public schools like four-time consecutive state champion Rochester:
‘‘The committee did speak to that, and it was unanimous that it needed to be private schools only. What it recognized is a private school has a tremendous advantage in terms of its boundary. In the Springfield area, Sacred Heart-Griffin, which is right next door to Rochester, can have kids come from Rochester, and Chatham and all of the Springfield school district ... all of the small schools around there within a 30-mile radius. And the kids from Rochester are going to come from the Rochester school district. So there is a distinct difference in how students can end up at Rochester and Sacred Heart-Griffin, and that played into the committee’s perspective.’’

On changing the eight-class football system and creating a ‘‘super class’’ like in Indiana:
‘‘No super class. Our advisory committee is fairly comfortable with an eight-class system, 32 teams per bracket and 256 qualifiers. That’s not perfect, either, but I don’t think they’ve found an alternative. We’ve had multiple proposals over the last five years, and none of them have gotten any traction. So I would conclude that while the eight-class system isn’t perfect, people prefer it over any other option that they’ve considered at this point.’’

On the state of Illinois high school sports:
‘‘On balance, things are in fine shape. We have a tremendous number of offerings. We have probably the most diverse interscholastic program in the country. We have everything from bass fishing to competitive cheer to journalism to chess. When kids participate for their high school and in our events, they have great experiences. So the state of the union, so to speak, is pretty good.’’