Heather Handwork has eight goals and five assists in her first season at Plainfield North playing without her sister Ashley, who graduated last year. 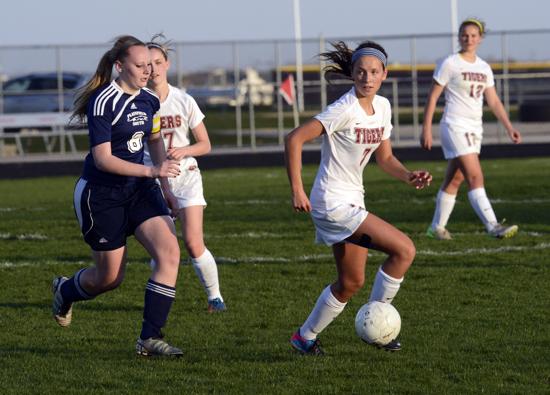 Heather Handwork has found herself in unfamiliar territory this season for Plainfield North.

For the first time, she is playing without her older sister Ashley, who scored 37 goals in being named the Sun-Times Player of the Year last season.

“We had such great chemistry on the field, and sometimes now, I look around, it feels like we’re missing the whole team, and I realize, it’s just Ashley,” Heather Handwork said.

The senior midfielder is part of a crucial lineage with Ashley and also Callie O’Donnell, a 2012 graduate and two-time All-Area star who elevated the Tigers’ program to prominence.

It is a measure of the respect she commands that Heather has the potential to be the more versatile player, according to Plainfield North coach Jane Crowe. “Ashley and Callie were more true forwards and dynamic scorers,” Crowe said. “Heather is more effective in the midfield, and because of that, she won’t have the statistics of the those two, but she might be the best all-around player.

“She could play any position on the field if we needed.”

Handwork has eight goals and five assists in the Tigers’ first nine games. In her career, she has recorded 41 goals and 29 assists.

Her striking play has also marked the culmination of a highly accomplished eight-month stretch. Last August, Handwork was one of three underclassmen on the Team Chicago Academy-Botafogo club program that captured the women’s U18 national championship in Overland Park, Kansas.

In December, Handwork was one of 24 players selected to the U18 Women’s National Team camp at the U.S. Olympic Training Center in Chula Vista, California. Those experiences proved vital to enhancing her skill set.

“It was a great experience playing with my sister’s team,” Handwork said of the Aurora-based club program. “The tempo of the game they played was a lot faster and that prepared me for the national camp.”

In California, Handwork received rigorous training by the country’s top amateur coaches. “They worked with me technically, like how to shoot long balls, be more creative with the ball and becoming more of a threat from distance, and I’ve already used that knowledge to score a couple of times this year,” she said.

Playing without her sister is only temporary. Heather is a Marquette recruit, where Ashley is completing her freshman year. Heather has learned to become less self-critical and play through her own mistakes. She feels more liberated than ever. She has full command of the game.

“I think I do a really good job of knowing what I’m going to do before I even get the ball,” she said.