Following the graduation of Joe Farrell and Zach Greene, Glenbard East was in need of a veteran offensive presence. Sterling Grove, a 5-11 outside hitter, has stepped into the role in a big way. 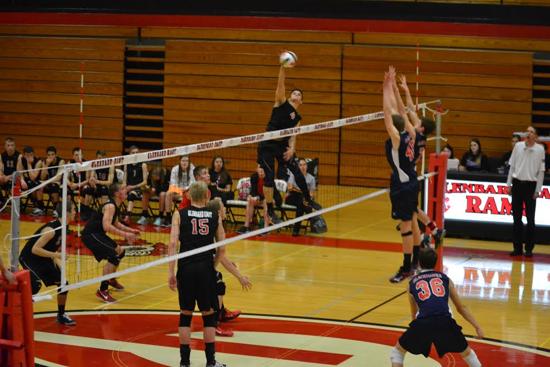 Nobody can accuse Sterling Glover’s mom of lacking imagination.

A big “Winnie the Pooh” fan, she named her only child after Sterling Holloway, a movie and stage actor who provided the voice of the famous Walt Disney character.

“She told me that when I was born, if I had been a girl, she would have named me ‘Scout” after the character in ‘To Kill a Mockingbird,’ ’’ said Glover, a Glenbard East outside hitter. “I was going to have a creative name either way.”

Glover, on the other hand, saves his creativity for the volleyball court. The 5-11 senior has developed into the Rams’ leading attacker following the graduation of Joe Farrell (Penn State) and Zach Greene from last year’s 23-13 team.

On Saturday in the championship of the Springfest tournament hosted by Glenbard East, Glover had 12 kills and a block in a 22-25, 25-17, 25-18 loss to unbeaten Glenbard West.

“We went from a 6-5 go-to guy to what, somebody who’s 5-11?” Glenbard East coach Marci Maier said. “See, we didn’t even lie about his height. But he can jump out of the gym and the things he’s able to do at his height are just phenomenal.

“What a fantastic kid he is. He was on the team last year but he didn’t play back row. He wasn’t one of our go-to hitters. But he worked extremely hard in the offseason to turn himself into a go-to hitter and an all-around player.”

Glover might not have played volleyball if not for his best friend, setter Cory Soehren, who convinced him to try out when they were in seventh grade. They have been playing together ever since.

“I played trumpet in the band before playing volleyball,” Glover said. “I gave that up so I could focus on one thing.”

Glover also focuses on providing leadership for a team that relies heavily on juniors off last year’s 27-1-1 JV team.

“The three seniors from last year — Farrell, Greene and (Willie) Brewer — made me aware that somebody else would have to be a leader this year,” Glover said. “I’ve tried to step into that role with a couple other guys.”

One of the things Glover wants to convey to the younger players is that it’s OK to be loud.

“I’m usually a serious, intense kind of guy,” said Glover, who plans to study physical therapy and play volleyball at Benedictine University in the fall.

“But this year I’m trying to be a loud guy to make the quieter guys on the team feel more comfortable. I want to let them know it’s OK for us to get a little excited.”

And as they demonstrated last weekend, Glover and Glenbard East have a lot to be excited about.