Jabari Parker gears up for battle of the brands

Former Simeon product Jabari Parker is leaving Duke for the NBA after one season and says he’s looking forward to partnerships with corporate America. 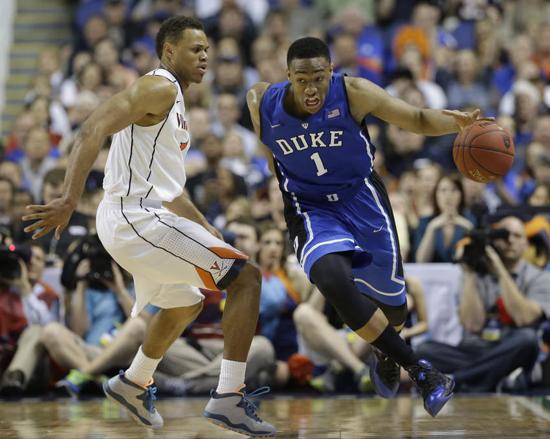 If Jabari Parker could take Carmelo Anthony’s NBA career right now, I wonder if he’d do it.

Eleven seasons for Anthony so far. No major injuries. More than $130 million earned from the Nuggets and Knicks alone, with every reason to believe he’ll come close to doubling that over the next five years. The sixth-highest endorsement haul in the sport, according to Forbes — $9 million — in 2013. Seven All-Star Games and one scoring title. Only three playoff series victories, but who’s counting?

You or I would take all that in a heartbeat, of course, but we’re not one-and-done prodigies pegged for the top of the draft. That’s Parker now, as it was fellow 6-8 forward Anthony — the player to whom Parker is most commonly compared — in 2003.

Isn’t that why the former four-time state champ at Simeon is leaving Duke even though he wrote, in a bylined SI.com story published Thursday, that “money was no object”? Even though he loves Duke so much that he used words such as “brother,” “uncle,” “mentor” and “father figure” to describe teammates and coaches and pledged to still graduate from the school?

“Lately, I haven’t slept much,” Parker wrote. “I’ve gotten pretty attached to life at Duke, and I don’t want to utter the word ‘goodbye.’ ”

So why now? It’s partly because his father, Sonny, is a former first-round pick who was out of the league by 27. Watching fellow Simeon hero Derrick Rose miss prime years on the court surely is similarly influential.

“I shrink my professional career with each year that I remain in college,” Parker wrote.

But the gist of it must be the same thing that would lead a prodigy to bet on himself over someone as accomplished and successful as Anthony.

Parker wants — expects — it all. His explanation of his position Thursday included references to writing books, engaging in “various business aspects” of the entertainment industry and partnering with corporate America.

“I have many interests beyond basketball,” he wrote.

This is less about player development than it is about brand development. The explanation itself was all about developing the Parker brand. Well, at least the parts that didn’t have the Duke public-relations machine’s fingerprints all over them.

A cautionary tale: Drafted No. 2 overall in 2008, one spot after Rose, was Michael Beasley. He was every bit as talented as Parker. Mostly for self-inflicted reasons, he already has been traded, waived and signed to a non-guaranteed contract.

It happens. A lot. But probably not to Parker, right?

Another one-and-done who went No. 2: Kevin Durant in 2007. He nearly doubles Anthony in endorsement dollars. He still inches along toward a degree from Texas. Oh, and he wins. That’s how Parker sees himself, is my guess.

“I have lived with great expectations ever since I dunked for the first time at 14,” he wrote.

Is this the right time to go for it all? There’s only one way to find out.