Marengo pitcher Mariah Dionne ended a Burlington Central threat in the top of the sixth inning and then cracked a homer in the bottom of the frame to lead the Indians to a 4-2 win Monday. 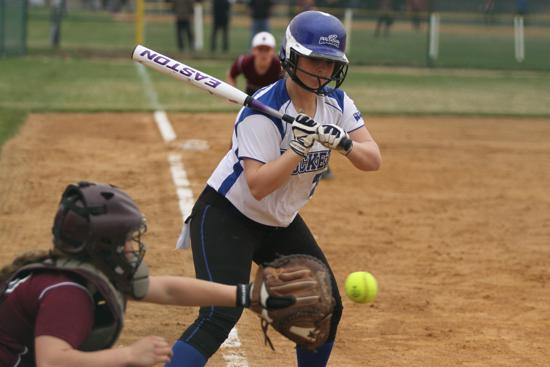 She may only be a freshman but Marengo pitcher Mariah Dionne showed the grit of a senior on Monday.

With Burlington Central already leading Marengo by one with runners at second and third and no outs in a pivotal sixth inning, Dionne struck out two and got a third hitter to fly out to end Central’s threat.

Homers in the bottom of the sixth by Dionne and Taylor Carlson gave Marengo a 4-2 lead heading into the seventh, and Dionne posted two strikeouts to secure the Indians’ win.

“You just have to kick in your mental toughness in that situation,” Dionne said. “You have to get it done.”

Both Dionne and Central pitcher Brooke Gaylord pitched well through three scoreless innings. Central’s Emily Kisch belted a solo homer in the fourth and Abby Kissack of Marengo (10-6, 4-0 Big Northern) did the same to lead off the bottom of the inning.

Central (8-6, 3-1) took a 2-1 lead in the fifth on an RBI single from Shelby Young that scored Rebecca Gerke. Gaylord and Tori Harvey were on base in the sixth when Dionne came up big in the circle.

Just as clutch as Dionne’s performance was Marengo’s two-out hitting in the sixth inning. Veronica Ruelius started things off with a single and Carlson promptly delivered a homer over the right-field fence.

Dionne followed with a homer to give herself a two-run cushion before closing out the game.

“The sixth inning was the game,” Central coach Wade Maisto said. “We couldn’t get a run in with runners on second and third and that gave them momentum like crazy. And I thought they had a higher energy level than we did today, and this game has to be played with some emotion.”

Gaylord struck out six and gave up seven hits, while Dionne tallied eight strikeouts against only five hits.

“[Carlson] was framing my pitches well and I messed up some today but the team had my back,” Dionne said. “I heard [the Rockets] were supposed to be good but, being a freshman, I had no clue.”