Wheaton Warrenville Co-op’s David MacDonald all-around state title defense may be in jeopardy after he suffered a minor concussion and required 11 stitches above his left eye on Saturday. 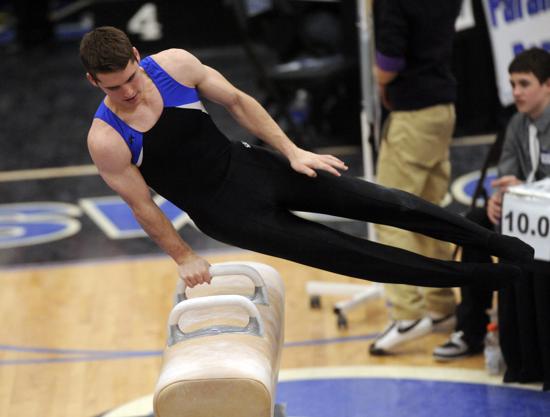 Now he has to get healthy first.

Last year’s all-around state champion, who also claimed four of the six individual event state titles, was injured during his high bar routine — his final event of the afternoon — during Saturday’s Donaldson Invitational in Wheaton.

“It was a very weird dismount and that’s something I’ve never seen him do,” Wheaton coach Greg Gebhardt said. “I didn’t really see it because I was too busy reacting.”

MacDonald sustained a minor concussion and required 11 stitches above his left eye.

He was released from Central DuPage Hospital on Saturday night, but the timeframe for his return is unknown.

The team concluded its conference schedule with a 150.2-146.6 victory at Naperville Central on Monday. According to Gebhardt, MacDonald chatted with his teammates and was in good spirits on Monday and then stopped by during Tuesday’s practice and hung out for the majority of the session.

Gebhardt has already ruled out MacDonald for Friday’s DuPage Valley Conference meet in Carol Stream. Wheaton should be able to win that title without him, as Naperville Central appears to be its biggest competition.

The date that matters most is May 7, when Wheaton Warrenville South host a sectional.

Wheaton has been the best team in the state all season. Only Stevenson has been able to post similar high scores, but even the Patriots’ season best of 158.15 has been eclipsed six times by Wheaton.

Lyons, Mundelein and Glenbard West are also having good seasons, but are generally scoring in the 150-154 range.

If MacDonald is able to recover and return for the state series, then Wheaton will again be in the driver’s seat for another title. If he is unable to return, the battle for title will certainly tighten and Stevenson will have a much better shot at its first title since 2010.

Gebhardt expects to have a better idea by next week regarding MacDonald’s status for the state series.