Senior right-hander J.R. Reimer was in control on the mound from start to finish Wednesday, scattering four hits as the Scouts blanked the Mustangs 6-0. 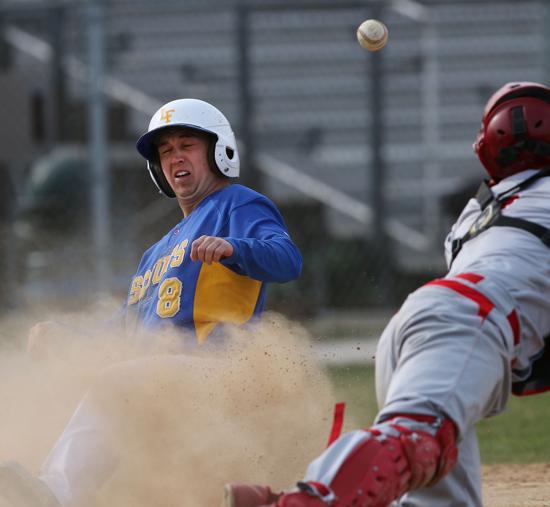 Senior right-hander J.R. Reimer was in control on the mound from start-to-finish Wednesday as Lake Forest handed Mundelein its first loss of the season, 6-0 in Lake Forest.

The bottom of the first inning. Five of the Scouts' first six batters got base hits off Mundelein starter Mike Metz, who came in with a 0.72 ERA in 19.1 innings. All of the scoring took place early, as Lake Forest (9-8, 2-5 NSC Lake) plated three runs in the first, then three more in the second.

Reimer scattered four hits, walked three and struck out two while doing a masterful job working both sides of the plate and changing speeds. Lake Forest's Nos.1-5 hitters combined to go 10-for-17 with a walk and five RBI. This, a day after Mundelein beat the Scouts in Mundelein, 12-0.

Reimer (2-for-3, double) and Scouts senior catcher George Karkazis (3-for-4, triple) accounted for Lake Forest's only two extra base hits. The Scouts had been shut out the previous three games. Mundelein righty Tyler Kozaritz worked 3.1 innings of scoreless relief, as the Mustangs (17-1, 3-1) also suffered their first division loss.

"The placement of my breaking pitches was huge tonight. When you pitch with the lead like I was able to in this game, it gives you that many more options as far as pitch selection and location. A lot of times batters tend to be more aggressive then." — Reimer