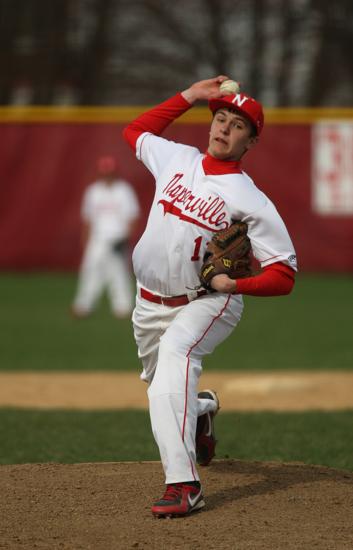 Glenn Kozlowski wasn’t feeling  pressure despite starting on the mound for the first time in 12 days.

Taking the ACT will do that for you.

Displaying flashes of what he did less than two weeks earlier in a complete-game win over Hoffman Estates, Kozlowski threw six strong innings as Naperville Central earned a 6-0 shutout of Glenbard East on Wednesday.

“I was a little nervous after (taking the ACT earlier) and once I got by that, I felt good about it. I was just happy that I had (my) infield to back me up. … The outside fastball mainly and then my curveball—they couldn’t really touch it and it just felt great out there,” Kozlowski said.

The junior right-hander picked up where Pat Maloney and Brad Dubow left off earlier in the series against the Rams in limiting them to just three hits while striking out three in picking up his second win of the season.

Given a 2-0 lead in the third thanks to Jack Alberts scoring on a throwing error and junior Bobby McMillen's RBI triple, Kozlowski held the fort down until his teammates came through with a four-run fifth.

McMillen, ticketed for Iowa State as a linebacker, had three hits—all going for extra bases—to highlight an 11-hit afternoon for the Redhawks (10-6, 5-1 DuPage Valley). Jason Wegner, Kevin Clifford, Mike Kolzow and Alberts each had two hits.

McMillen is hitting a robust .522 after picking up the three hits and three more RBI on Wednesday.

“I usually come to the plate every at-bat with the same approach—try to jump on the first-pitch fastball, which I saw first two at-bats,” McMillen said. “I had some success there. Then I felt after the first two at-bats, he threw me a first-pitch fastball both times, so I knew the third at-bat he was probably going to come off-speed, which he did. I was sitting on that, so I drove that into the gap. It was overall a good day at the plate.

“Had a good day at the plate and had some guys on base that I could knock in.”

Failing to earn a sweep in its first conference series against Lake Park, Naperville Central didn’t let that opportunity to sweep the Rams go by as it continues its quest to defend its 2013 DVC title.

“We’re still in the feeling-out (process), who’s where in the standings and we’re all keeping an eye on it,” Naperville Central coach Mike Stock said. “But it’s cliché … we got to go one day (at a time).”

MacDonald took the loss for Glenbard East (8-9, 2-4 DuPage Valley) after giving up all six runs on nine hits while striking out six in five innings of work.