Buffalo Grove sent 11 batters to the plate in the opening frame Wednesday, scoring seven runs to key a 10-3 romp. 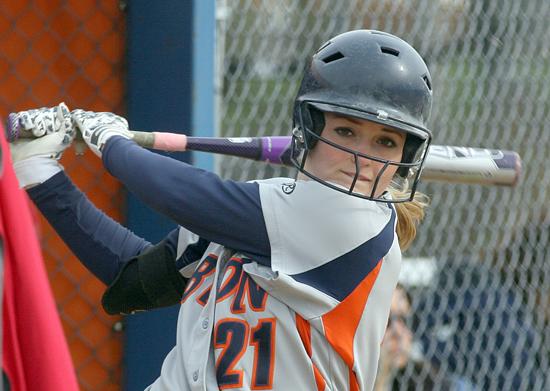 The game was decided in the first inning, when Buffalo Grove sent 11 batters to the plate and scored seven runs. The Bison produced six hits, including two doubles by leadoff hitter and junior centerfielder Caitlin Catino and a two-run homer by senior shortstop Dea Barton.

Catino was 4-for-4 with a walk, knocking in two runs and crossing the plate once. She also made two putouts on hard-hit balls deep in the outfield.

Sophomore catcher Emily Carnes was 2-for-4 with an RBI and a run scored for Buffalo Grove. Camardo gave up one unearned run, with three strikeouts and no walks in 3 1/3 innings. Steady struck out five and walked one Mustang batter. Rolling Meadows senior second baseman Grace Skorin was 2-for-3 (reaching base in all four of her at bats) with an RBI and a run scored. Mustangs senior first baseman Lane Winkler had two hits.

"I didn't know it was a home run at first. It was my first one. It got the momentum going for us." — Buffalo Grove shortstop Dea Barton