Henricksen: These five ready to open eyes, grab the attention of college coaches

Zion-Benton's Admiral Schofield heads a list of a handful of top Class of 2015 prospects in Illinois ready to open eyes as the first "live" evaluation period tips off this weekend. 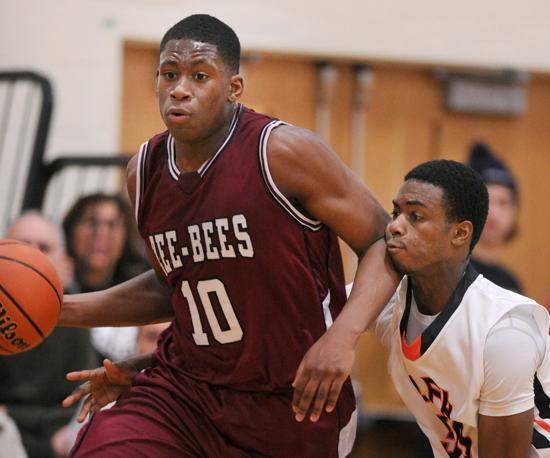 St. Rita’s Charles Matthews and Simeon’s D.J. Williams are all taken care of as they head into this first “live” evaluation weekend of the offseason.

Matthews has committed to Kentucky, while Williams has given his pledge to Illinois.

And all Stevenson superstar Jalen Brunson has to worry about is which high-major schools he will keep on his list and which ones to cut.

For the top three prospects in the Class of 2015 here in Illinois, the hard part –– attracting the heavy hitters and just the right suitors –– has already been accomplished. But for a whole mess of other players, there is plenty of showcasing and promotional opportunities ahead.

Schofield is also a breath of fresh air in many regards.

Throughout a conversation with the junior, he repeatedly speaks of a couple areas of the game of basketball you love to hear. Oh, he’s anxious to show everyone his game, but his dialogue isn’t dominated with playing the “being disrespected” card or how he’s “underrated and overlooked.”

He talks over and over about winning. And he doesn’t just say the words “winning is important.” He really seems to get it.

“There are so many different ways to impact a game, and that’s what I need and want to do,” says Schofield. “What matters is how you can help your team win. I want to make the extra pass. I want to get the tough rebound. I want to make the momentum-changing shot. A big part of it for me is going out and finding a way to get my teammates involved and make them better.”

That’s a quote from a seasoned pro of 10 years in the league –– well, some of them at least –– not a young kid just finishing up his junior year of high school.

“I’m excited about the opportunity to lead Zion-Benton,” says Schofield. “I know people are going to be looking past us now that Milik Yarbrough is gone, thinking we’re going to be down. But I want to help keep Zion-Benton basketball on the map.”

Then there is his quest to get better as a player. He will give you –– and did provide –– the cliché, “I’m going to get out what I put in” quote, but he also knows there is plenty of work to be done on his individual game and finding ways to improve.

“I’m going to work hard,” Schofield says matter-of-factly when asked what the key will be in attracting more college interest. “I’m going to improve my game, put the time in and do whatever I can to make myself a better basketball player.”

Schofield is big and strong. Maybe big and strong isn’t definitive enough when describing the 6-5, 210-pound’s physique and style. A perimeter player with terrific size and strength, Schofield has the ability to take contact and get to the rim or drop in a three-pointer.

Schofield is one of many players in the Class of 2015 who are poised to grab the spotlight during their senior year, beginning with the “live” April evaluation period set to begin this weekend.

In addition to Schofield, here are four other players, currently with a combined six offers between them, the City/Suburban Hoops Report guarantees will enhance their reputations over the course of the next several months among college coaches.

What’s to like: Such an unknown due to missing so much time in his high school career (missed more than a year with a stress fracture in his back). He just began rounding into playing form in the second half of his junior year, while his body is still developing. With legitimate size and length, the ability to move well, and the capability to stick an open jumper out to the three-point line, Lieb is an intriguing prospect going forward as he gets better by the week. Lieb showed some eye-opening flashes during his weekend at the NY2LA’s Swish ‘N Dish in early April.

The interest: A lot of eyes –– at all college levels –– will be on Lieb as he plays out the AAU circuit this offseason with the Illinois Wolves. A surplus of schools have been checking in on Lieb, including Loyola, Drake, Brown, Dartmouth, Lehigh, Indiana, Creighton, American, Saint Louis, Illinois State, Northern Iowa, Princeton and Santa Clara.

What’s to like: Stumpe’s scoring ability. He scored 42 points in a game during the opening week of the season and took off from there. A shooter and scorer who uses both hands so effectively, the junior guard is already the school’s all-time leading scorer, pumping in over 1,200 career points heading into his senior year. Maybe he doesn’t jump as high or glide quite as effortlessly up and down the floor as some colleges would like, but he does something all college coaches like and need: He puts the ball in the hole.

What’s to like: After putting together a big junior year, leading his high school team to a second-place finish in Class 3A while averaging 15.8 points, 6 rebounds and 2.5 assists a game while knocking down over 60 three-pointers, Block is on the map. Block, who has solidified himself as a Division I prospect, impacts games in multiple ways with his size, ball-handling, shooting and overall versatility on the perimeter.

The interest: There are just two offers to date –– SIUE and UMKC. That will change quickly as more coaches watch Block playing with Central Illinois Net Gain this spring and summer. An increase of mid-major programs continue to get involved with the jack-of-all-trades Block.

What’s to like: The versatile combo forward blossomed during his junior season, grabbing the Hoops Report’s attention while averaging 15.7 points and 8.1 rebounds a game. Big and strong with wide shoulders and long arms, Griffin’s skill level continues to improve along with his assertiveness and confidence. Griffin will play on the EYBL circuit with Wisconsin Playground Elite.

The interest: There are a bevy of mid-major programs that have checked in on Griffin during the second half of his junior year. Northern Illinois and, just recently, Illinois State offered. Saint Louis has been heavily involved, with the likes of Wichita State, Drake, Loyola, Wisconsin, South Dakota State and Middle Tennessee State all showing interest.

RT @michaelsobrien: The pandemic didn’t stop the Pangos event, which was held again in La Grange last weekend. Many of the top freshmen and…

From the big prize still remaining (Bryce Hopkins: Is a decision looming soon?) to overlooked and under-recruited p… https://t.co/egTrr83s7u

RT @michaelsobrien: It's just one month from Signing Day. Here's a look at where recruiting stands. @joehoopsreport breaks down: -The big…