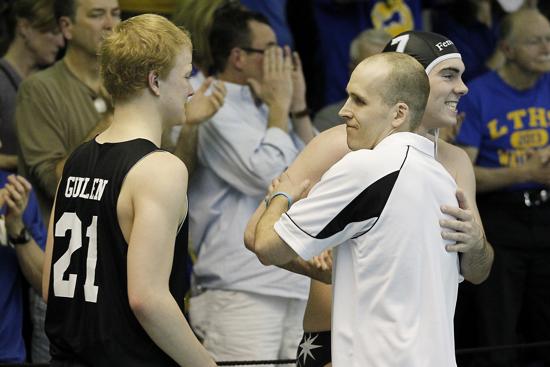 Chris Parolin didn’t notice much of a difference.

As a sophomore in 2002, Parolin and Fenwick won the first IHSA state championship in boys water polo. He also won state one year earlier when the Friars captured the last state title as part of the Illinois Swimming Association.

It wasn’t until other IHSA spring sports state champions were crowned in 2002 that Parolin realized Fenwick’s feat was on par with other schools.

“When I first looked back on it, there was not much to it,” said Parolin, who is now 28 and a medical supplies sales representative in Chicago. “But I do think it gave us a sense of being in a relationship with other sports. The big difference was getting the recognition.”

While lacrosse hopes to become an IHSA sport, water polo continues to see growth as the last sport to join the IHSA after decades of falling under the direction of the ISA, an association for the state’s high school swimming, diving and water polo coaches. According to Beth Sauser, the IHSA’s water polo administrator, there are currently 81 boys teams and 72 girls teams across the state.

The sport’s growth has occurred in the Chicago Public League where there are 20 boys teams this season, according to Illpolo.com.

New Trier boys water polo coach David Goodspeed has been affiliated with the sport since he started playing in 1974. He graduated from Glenbrook North in 1978 as the Spartans became one of the Chicago area’s first public school teams. Goodspeed coached Glenbrook North from 1982-86 and started New Trier’s program in 1993.

In the boys game, Goodspeed said he sees the days of dominance by Catholic schools — some of which sponsored water polo teams long before the ISA was involved — waning a little bit. Lyons ended Fenwick’s eight-year run of state titles in 2012 to become the first public-school champion. Entering the week, Naperville North was Illpolo.com’s top-ranked boys team. Under IHSA rules, all schools must abide by the same offseason practice rules, which wasn’t the case under the ISA.

“You’ve seen a rapid transition from dominance of the Catholic League to a more level playing field,” Goodspeed said. “Since it’s become an IHSA [sport], it has made it more competitive from top to bottom. On any given day, the top 10 [boys] teams can beat each other.”

Kyle Perry remembered his father was instrumental in trying to get the IHSA to adopt water polo as early as 1999. David Perry even had buttons made that read, “Ask me about the IHSA,” and wore them to matches in the years leading up to the IHSA board approving water polo as a sport.

“It was on the bubble. It was a matter of getting a variety of different schools to participate,” Kyle Perry said.

Kyle Perry said water polo athletes at Fenwick were not treated differently than other athletes prior to water polo becoming an IHSA sport, but the recognition has helped.

“It’s great, to be honest, as far as being a student. You’re really a varsity athlete on even footing in the IHSA,” Perry said. “When we won state, we had a huge pep rally. It was just like the basketball team [going to state in 1998].”

Vernon Hills athletic director Brian McDonald is a big proponent of adding boys and girls lacrosse to the IHSA’s roster.

But he can’t do it alone.

While more than enough girls lacrosse teams want to play in the IHSA playoffs and become a fully-sanctioned sport under the state organization, there are too many dissenters among the boys teams. And the IHSA stipulates that both boys and girls lacrosse have to join together.

McDonald said he’s frustrated by the schools that have teams but aren’t willing to be recognized by the state’s association. In response, McDonald no longer schedules games against schools that refuse to join the IHSA.