No hurdle too high for Aurora Central's Patrick Lefevre

After earning All-State honors last year in the Class 2A 110-meter high hurdles, Aurora Central’s Patrick Lefevre is once again a contender for a top finish at the state finals. 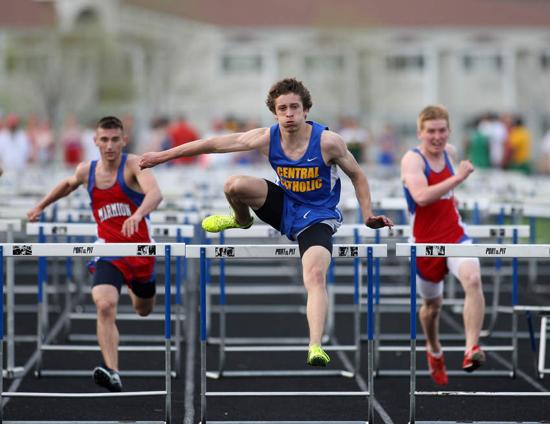 “I never thought I would be able to get to that level,” the Aurora Central senior said of earning All-State honors last year in the Class 2A 110-meter high hurdles at the boys track and field state meet in Charleston. “It was amazing.”

The Aurora native, an equally gifted student who will continue his career at the University of Chicago next fall, is once again one of the leading contenders for a top finish at the state meet.

But Lefevre is far from a one-dimensional athlete. He also qualified in the 300 intermediate hurdles and helped power the Chargers’ 400 relay to a third state-qualifying event.

“There is always work to be done,” Lefevre said of his focus in the coming weeks. “You can always get better. All of the events help me.”

“He had an attitude as a freshman,” Kerber said. “But the jury was still kind of out. He started transforming himself as a sophomore and he kind of took off as a junior.”

“Having him on the (400 relay) is a huge reassurance to everyone,” said Connor Robinson, a senior who teams with Lefevre, Joey Perez and Jeffrey Marcoux in the event. “We always know he’s going to give 110 percent in every race. We’re going to go really far.”

For Lefevre, the sprint relays underscore an inescapable element to track and field.

“It’s a team sport,” Lefevre said. “You just can’t focus on one thing.”

But Lefevre has one compelling vision as the meat and potatoes of the season — conference, regionals and sectionals — approach.

“I am hoping for at least top two (in state in high hurdles),” Lefevre said. “I know who my competition is. I have been looking forward to it all year.”

Kerber, though, is not entirely convinced the shorter hurdles race is his most-tailored event.

“His best races are ahead of him in the 300 hurdles in weeks to come,” Kerber said. “He is a strong contender for a state championship (in both hurdles events). I think he can make an impact at the state meet.”

Lefevre is also an accomplished 200 runner with state potential.

“(The 300 hurdles make) the 200 not seem as long or as difficult,” Lefevre said. “It really helps with the mental part.”

The longer hurdles and open 200 are separated only by the 1,600 run in a meet’s schedule.

“We will have to make a decision between relays and the open 200 toward the end of the year,” Kerber said.

Lefevre will be dangerous in whatever sequence of events he selects.