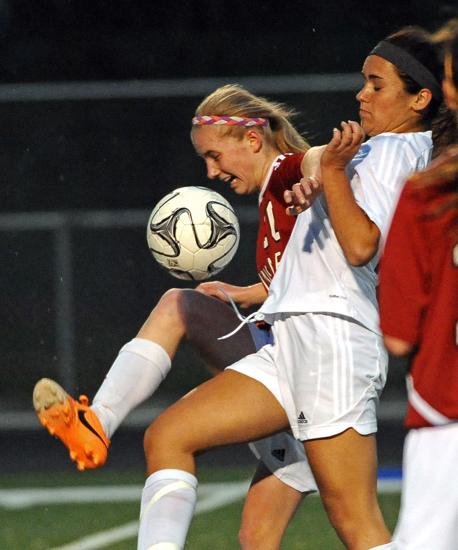 WHEATON — Hinsdale Central players have learned to play hard every second, which is why it shouldn't be a surprise that the Red Devils' only score came with 5.4 seconds remaining before halftime.

The defending Class 3A state runner-up opened pool play in the Naperville Invitational Thursday night with a 1-0 victory over Wheaton North. Meghan Schick, a senior midfielder, scored when she stole the ball from a Falcons' defender and then rifled a right-footed shot from about 20 yards out.

The low line drive went off the hands of goalkeeper Sydney Partington as she dove to her right. Partington tipped the ball, but it caught the inside portion of the left post and went in.

Schick stole the ball at the end of Rexilius Field nearest to the scoreboard.

Schick felt she was in a scoring slump lately and said she took extra shooting practice for an hour after practice Wednesday.

"She takes advantage of any and all opportunities," Red Devils coach Michael Smith said. "She had the speed and the separation. It went in for us."

Wheaton North (2-6-3) had the most scoring chances off the toe of Lexi Pelafas.