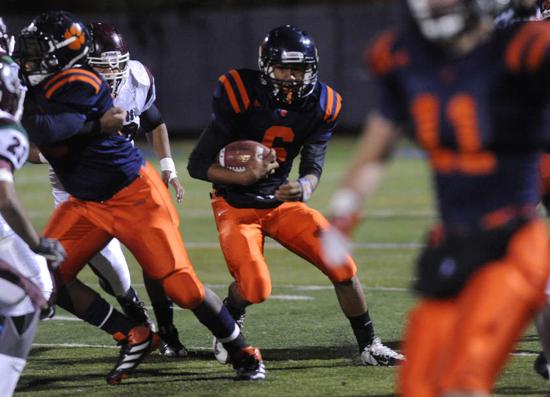 “Getting an offer and winning a state championship have been the two things that I’ve been working for since getting into high school,'' Oak Park-River Forest's Lloyd Yates said. | Sun-Times Media Library

“I like that they are hard-nosed, and they play well on both sides of the ball,” Dew-Treadway said. “They also seem to always get after opposing teams.”

Dew-Treadway, a Scout.com three-star prospect, most recently added offers from Syracuse and Connecticut.

“I haven’t really done that much research on Syracuse, but I know they are a good school and have a good business school and they have a good communications school, so that makes me interested in them,” Dew-Treadway said. “I also haven’t done too much research on Connecticut, so I guess going out there will help me see what I like. I know [former Bolingbrook girls basketball star] Morgan Tuck goes there, so that would be cool to see her if I get out and visit.”

Oak Park-River Forest junior quarterback Lloyd Yates has three offers under his belt, but he says nothing compares to the feeling of getting the first one.

“Western Michigan was the first school to offer me, I felt excited,” Yates said. “Getting an offer and winning a state championship have been the two things that I’ve been working for since getting into high school. It’s inspiring and uplifting to see one of your goals being accomplished.

“It makes me want to work harder and now accomplish goal No. 2.”

Yates has since added offers from Illinois State and Colgate, and has received interest from Northern Illinois and Nevada.

“To me it’s all exciting,’’ Yates said. ‘‘The college process to most is very stressful, but to me it’s a thrill. It’s getting me pumped just thinking about where I’m going to go for the next four years of my life. It’s a very tricky and tough process with a lot of tough decisions. But luckily for me, it’s fun.”

“Later that night I called [tight ends coach] Keegan Jones and he talked to me about how they feel I’m the right kind of kid they want at their school with a mix of academics, football and just character-wise,” Gasiorowski said. “He told me they were going to offer me. It was an amazing feeling getting an offer from them.”

There are a couple of visits that King has coming up, and he’s excited about seeing schools and getting that part of his recruitment moving forward.

“So far I only have visits to Notre Dame and Ohio State planned,” King said. “I am looking forward to just getting out and seeing the different campuses when I take them.”