Richard Fordon, who is 4-0 with a 1.00 ERA and has struck out 18 over 21 innings for Mount Carmel this season, is also a forward for the Caravan’s hockey team. 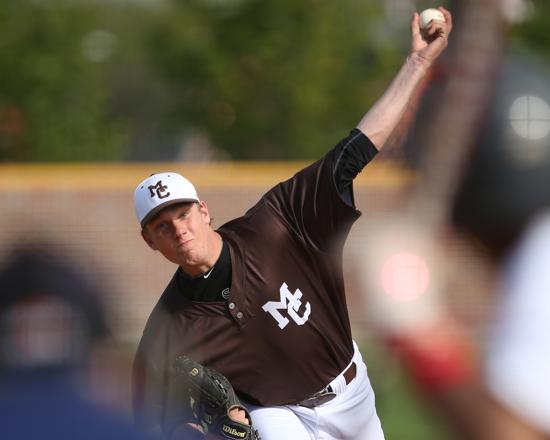 Richard Fordon has taken a simple approach this season to the art of pitching: concentrate on throwing first-pitch strikes and staying ahead in the count.

“That’s been the key so far,” Fordon said. “I’m also hitting my spots rather than just throwing strikes.

“My changeup is coming around, but I’ve been relying on my curveball for my strikeout pitch.”

Coach Brian Hurry has noticed a few other differences, beyond the first-pitch-strike approach.

“I think his biggest progression is his mound presence and being a leader on the field,” Hurry said. “But he’s definitely throwing more strikes and getting ahead in the count. We told him after last season that he needs to attack the zone.”

Fordon is familiar with attacking the zone. Not only as a pitcher, but as a forward on Mount Carmel’s hockey team.

When Fordon decided to attend Mount Carmel out of Parker Junior High in Flossmoor, he was thinking more about hockey than baseball.

“In eighth grade I was definitely more advanced in hockey than baseball,” Fordon said. “The 20 Kennedy Cups (championships) is what drew me to Mount Carmel.”

It was during the summer of his sophomore year, however, when he began to realize baseball might offer a better future. At 6-foot-3 and 225 pounds, Fordon is a menacing presence on skates and boasts a booming slapshot. However, college baseball coaches began to notice his size and powerful left arm.

“I started to play for Top Tier that summer and I kind of realized I could do something with baseball,” Fordon said. “The other thing is, I couldn’t take time out of my studies to go and play juniors in hockey.”

Fordon takes his studies seriously, ranking 13th in his class with a 4.28 GPA. He scored a 30 on the ACT.

His ability to excel in the classroom opened the doors to many outstanding universities. Northwestern, Villanova and Indiana were in pursuit of the southpaw. When it came time to make a decision, Fordon settled on Northwestern.

“I was looking for a strong academic school and a school that played in a strong baseball conference,” said Fordon, who plans to major in economics. “Northwestern seemed right for me.”

“I feel confident personally,” Fordon said. “Our defense and pitching should really be a weapon. During really close games, it all comes down to pitching and defense and we have both.”

For almost his entire life, Fordon has played baseball and hockey. He said it’s going to be tough to hang up the skates at a competitive level.