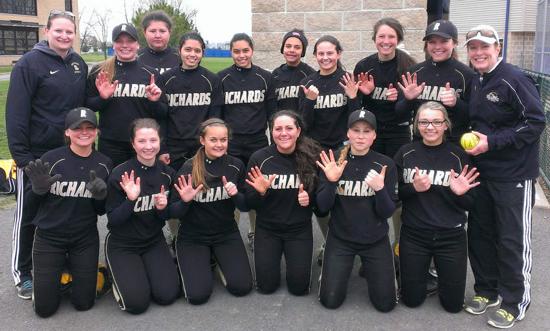 To say Julie Folliard enjoys being the softball coach at Richards would be quite the understatement.

“I have the best job in the world,” she said. “I love coaching and helping young adults find their strength, voice and develop courage through softball.”

To say nothing of helping them find success.

Folliard reached another milestone on April 23 when the Bulldogs defeated host Reavis 11-3. It was her 600th victory in a career that has spanned 26 seasons.

Following the game, Reavis coach Jim Meskill awarded Folliard the game ball. She will be honored Thursday at 6 p.m. in a reception at Richards following practice.

“I just know that (in the 600th win) the team worked together toward our goal of winning Richards another South Suburban Conference championship,” Folliard said.

The Bulldogs, 13-4 overall and 11-2 in league play, are trying for a four-peat in the South Suburban Red.

After going 13-16 in her first year as coach in 1989, Folliard has recorded 24 consecutive winning seasons. Her 2011 team, led by Brianna LeBeau and Hannah Jenkins, was 32-3 and captured a Class 4A sectional title.

“The legacy of our 600th win is that it is the accumulation of years of teamwork and commitment to excellence from many great young people, dedicated coaches and supportive parents,” Folliard said. “That is a legacy we all share in our Richards softball program and the Bulldog Nation.

“I am extremely grateful to be a part of those 600 memories at Richards, and look forward to many more.”

Lincoln-Way West plans on going a long way in 2014 behind the powerful arm of Morghan Dieringer.

Warriors coach Heather Novak, however, has also seen some glimpses this season of a bright pitching future in Amanda Ruskowsky.

The sophomore righthander improved her record to 5-0 on the season on April 25, striking out seven and allowing just three hits in a 5-2 win over Metamora. Also a starting second baseman, Ruskowsky leads the team with six home runs and 23 RBI, to go along with a .458 average.

“Amanda saw limited time playing as a freshman on the varsity last year, but we knew she was going to be a key player to our success this season,” Novak said. “She has done a great job stepping in both defensively and offensively after Sam Magruder’s graduation.

“As a pitcher, Amanda is continuing to get better. She has a great mentor in Morghan.”

Ruskowsky has 53 strikeouts and has allowed seven earned runs in 37 innings. Her ERA is 1.32.

“Amanda is very hardworking and dedicated to softball,” Dieringer said. “We really enjoy working together and I have tried to be a positive influence for her on and off the field.”

Morghan Dieringer, of Lincoln-Way West, is the SouthtownStar Softball Player of the Week.

Dieringer, a senior pitcher, was 3-0 with wins over Lincoln-Way North, Trinity and Canton. She struck out 34 and allowed one walk, nine hits and three earned runs in 21 innings.