Lemont’s Rylie Jay is a dual-threat for opponents

Rylie Jay is batting .455 with three home runs and 27 RBI for Lemont, and possesses a powerful throwing arm from shortstop. 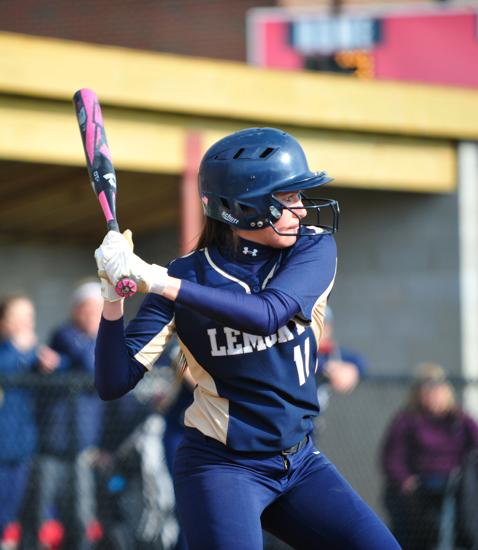 When Lemont’s Rylie Jay went 3-for-3 with three home runs in a game during the 2013 season, she fulfilled one of her biggest softball goals.

There is still plenty of time for an upgrade.

Jay, a junior shortstop, has a lot of swings left in her powerful bat, which so far in 2014 has produced a .455 average, three home runs and 27 RBI.

She is near the top of the Southland in stolen bases with 16, and has one of the strongest throwing arms in the state.

“I don’t look at it that way,” said Jay, who is verbally committed to Western Illinois University. “I just keep on working. I feel that I can do better every single time. No matter how fast I go I feel that I can be faster. So it’s kind of a work ethic.

“But I am blessed (to have talent), and I am thankful for everything.”

Jay, 17, has been on the Indians varsity since her freshman season. Also a basketball player in grammar school, she decided to concentrate solely on softball, and follow in the diamond-game footsteps of her father, Brian, and her brother, Tyler.

“I always knew,” she said. “Even when I was in kittens, my first year of softball, I wanted to go pro. Obviously, things changed, but all along I’ve wanted to play in college.”

At shortstop, Jay has tremendous range, but it’s her arm that really makes eyebrows raise. Batters had best run full speed on grounders to the hole. If she has the ball she’ll burn baserunners who stray, as one from Tinley Park painfully found out during a critical moment in a one-run loss to Lemont earlier in the season.

“I always threw a baseball with my brother and my dad, and I was told that I throw like a baseball player,” she said. “I know my ball curves a little bit, so I work on it with my (first basemen). They get used to it, and know it’s coming.”

Hitting out of the three hole, Jay can slash and bash with authority. She was consistent across the board in 2013, with 10 home runs and 13 doubles.

“I don’t try for home runs. I just aim to hit the ball,” Jay said. “Home runs will come if you keep hitting the ball, and make contact.”

And keep working. That’s an attribute that Lemont coach Christine Traina took into account when bringing her up to the varsity as a freshman.

“You look at Riley and she’s got a lot of talent,” Traina said. “But what you love about her more is that she’s just a competitor. She loves the game and she wants to keep improving. As a coach, you’ve got to love it.”