Sophomore pitcher Jessica Rago gave up just two hits in three innings and led all players with four hits and six RBI of her own to lead Elgin past Larkin 20-1 on Wednesday. 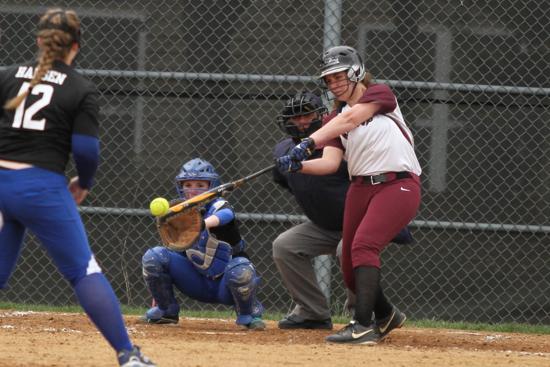 Elgin's Jessica Rago connects for one of her four hits in the Maroons' win over Larkin. | Gary Larsen/For Sun-Times Media

Sister-school battles bring out energy like no other games this side of the postseason.

“Playing Larkin is always a lot of fun. They’re our cross-town rivalry,” Elgin senior Anna Eckholm said. “We want to win and we want to win big.”

Rago pitched well despite a sore arm and a sore lower leg that took a brisk line drive off the bat of Larkin’s Alexandria Bednarski. The sophomore only gave up two hits in three innings of work before junior Sabrina Stockman replaced her and kept Larkin (3-16, 1-9) from scoring in two innings of work.

Rago also led all players with four hits and six RBI, including a solo homer in the third inning.

Elgin roughed up Larkin starting pitcher Maria Rojo with a six-hit, nine-run first inning. Kelly Bremer, Nora Stanley and Jennah Perryman each had RBI hits while Rago had two hits and three RBI in the inning.

Bednarski singled off Rago’s leg in the second inning and later scored on an RBI single from Alexis Price.

Elgin kept its bats going in the bottom of the inning, scoring seven runs punctuated by a three-run double from Bremer, who finished with three hits and four RBI.

The Royals have struggled this year, but even chasing a 15-run deficit their bench was vocal and positive throughout.

“The energy we had was awesome,” Larkin coach Anne Vogt said. “Our pitching struggled a little and they started pounding, but if we continue to play with that kind of energy it will eventually show up on the field and carry over.”

Elgin’s four-run third inning featured a Jemiyah Stewart double, a single from Jenna Lombardo, and then a three-run homer from Eckholm, who wasn’t clear what kind of pitch she jacked over the left-field fence.

“Honestly, I don’t really know,” Eckholm said. “I just swung at it and it felt right. She gave me a good pitch and I took my opportunity.

“We’ve been working on hitting a lot in practice and our focus has been putting the bat on the ball, swinging at our own pitches, and letting the bad ones go.”