Quin Krisik hates to lose. The setter has proven as much, helping Lake Park avenge two of its three losses earlier this season. 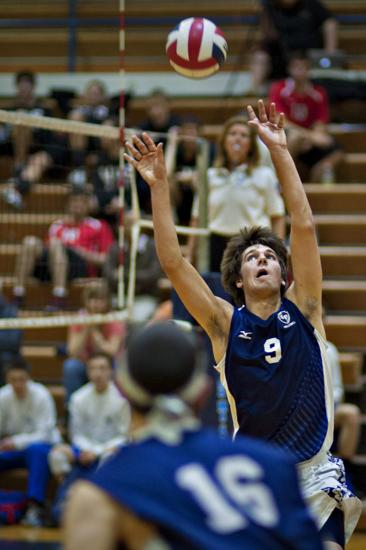 “I look at everything in the volleyball world,” said Krisik, a 6-1 setter. “I read everything available. I’m interested in everything that’s going on. We went to see Penn State play at Loyola. It’s so cool to see guys play who you saw play in the state finals a few years ago.”

Krisik can picture himself in the state finals, too.

Led by Krisik, the Lancers have won 19 of their first 22 games. They have avenged two of their losses — both suffered at the Tiger Classic — by defeating Naperville Central in DuPage Valley Conference play and beating New Trier at the Downers Grove South invite.

“That New Trier win was nice to get,” Krisik said.

Lake Park’s third loss was a 27-25, 22-25, 25-23 decision to the hosts in the title match of the Downers South invite on Saturday. The loss overshadowed Krisik’s 31-assist, six-kill performance.

“He’d be one of our top attackers if he wasn’t a setter,” Lake Park coach Tim Murphy said. “He is the glue that holds the team together. The tempo we run, a lot of that is centered around Quin. We have a talented group of guys, but the other guys recognize how good Quin is in all facets of the game. They respond to him.”

Now if Krisik can only have the same effect on his younger sister, Zoe.

“My parents got me started in volleyball,” Krisik said. “My mom played in high school, and then they both picked it up after college for fun. I’m trying to get my little sister interested. She’s pretty small for her age (10), so I’m hoping to get her to be a libero.

“But I used to play baseball, so if she decides to play softball, that’s OK.”

Krisik played club ball at Sync for one year then spent two years at Sports Performance before the Lancers organized their own club team, Joust, under the tutelage of former Lake Park setter Matt McCown. Joust qualified for USAV Boys Junior Nationals in Houston, Texas in late June.

But all of Krisik’s energies are focused on a state title.

“We’re taking it one step at a time,” said Krisik, who plans to study engineering at either Marquette or Milwaukee School of Engineering. “We’ll cross the other when we get to it.”

One thing is certain, Krisik and company won’t be an easy out.