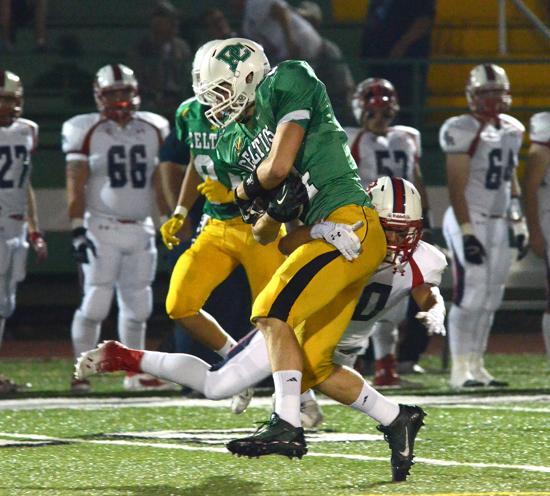 Providence junior tight end Nate Vejvoda is continuing to add scholarship offers, with the most recent coming from Central Michigan.

“I am happy to receive an offer from Central Michigan. I like that they have a solid football program,” Vejvoda said. “They did well last season in the MAC and lost to some tough teams. I also like that they are big on tight ends and utilize them well and often in their offense.’’

Playing college football would mean following in his brother Mitch’s footsteps, who is a sophomore tight end at South Dakota State. At this point, Nate has other offers from Western Michigan and Toledo. Plus, the 6-5, 210-pound prospect has recently visited Iowa and Northern Illinois.

“I loved Iowa. The coaches were great and very nice. Their football program has been a favorite of mine over the past couple of years,” Vejvoda said. “ I really like how they utilized their tight ends. Iowa is also close to home and some well-known Providence alumni have attended Iowa.

‘‘As for Northern Illinois, they have an outstanding football program that has done well the past couple of years. I also liked their football facilities and coaches. Northern Illinois is also close to home, which is nice.”

“My coach told me that they were offering me, and I would like to get to know more about Tennessee,’’ Williams said. ‘‘I don’t know much about them right now.”

Other colleges that have dropped by to see Williams during the evaluation period include Notre Dame, Purdue, Iowa State, Missouri, Michigan and Indiana among others.

“Coach Brian Callahan visited Bloom last week and told me to give him a call,” Pugh said. “He told me they were going to offer me over the phone. I like Western Michigan, even though I haven’t made a visit yet. I have heard a lot of good things about the facilities and their recruiting.”

‘‘I also like the coaching staff at Akron, they are really cool people and both teams are successful programs as well.”

Yates has other offers from Western Michigan and Illinois State, and is enjoying the recruiting process.

“Learning about these different schools and what opportunities they provide has been exciting,” Yates said. “It’s something that I always look forward to. All schools offer something unique.”