Naperville Central used a fast start as its dream season continued thanks to an 11-0 defeat of Wheaton North Friday. 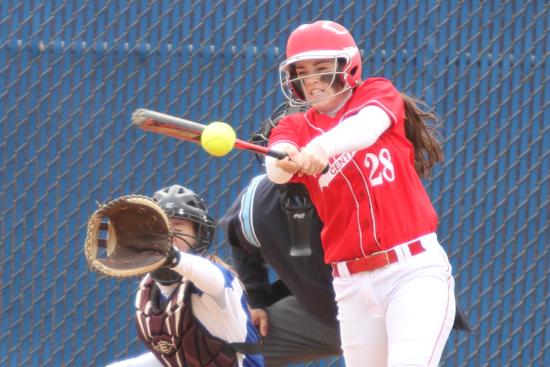 The girls on Naperville Central’s 1989 state runner-up team set the bar high for the Redhawks’ softball program. Twenty-five years later, that team has some competition.

“Apologies to the girls on that ’89 team,” Redhawks coach Andy Nussbaum said. “But this is the best team I’ve had here in thirty-one years.”

Naperville Central won 11-0 over host Wheaton North in DuPage Valley action on Friday and had everything working in staying unbeaten in the conference.

If it wasn’t Courtney Giebel continuing her season-long quest to smoke every ball she hits, it was Julie Kestas using her heater to strike out nine Falcons, or right fielder Alison Pankau making two diving catches in foul territory in the fifth inning.

Pankau’s second catch had her sliding on her back into the fence down the right-field line.

“It’s not the first time I ran into a fence,” Pankau said. “Last week my foot got caught under the fence. Our second baseman had to help me get out.

“But our outfield has been solid every year, with Maddi (Doane) in center and (Katie) Lamich in left. They don’t ever let anything drop.”

Meanwhile, Kestas was busy striking out six consecutive batters from the first to the third innings.

“I felt really good out there today,” Kestas said. “My catcher, Kaitlyn (Skarecky) does an awesome job of calling the game, and her and I were in the zone.”

Nussbaum has seen Kestas take a stride forward since her sophomore season.

“I think she’s faster this year and she’s a little more mature,” he said. “She throws the ball hard and we have a nice one-two punch with her and Keegan (Hayes).”

Central led 9-0 after Giebel’s three-run homer in the third inning scored Lisa Tassi and Megan Nerger, and Giebel hit a solo homer in the sixth. The game’s final run came on a sacrifice fly from Kestas that scored Gonzalez.

Wheaton North (3-16, 0-5) only managed two hits off Kestas on singles from Madison Roskuszka and Kelly Thornton. Falcons coach Danielle Soraghan knew her side was up against a top 10 team in the state, but she liked the fight she saw in her girls.

“I can’t say I’m that disappointed,” Soraghan said. “I would have liked to see a few more hits but we held our own and defensively I thought we did a great job.”