Maine South went 1-1 and Stagg lost both its matches in the pool. 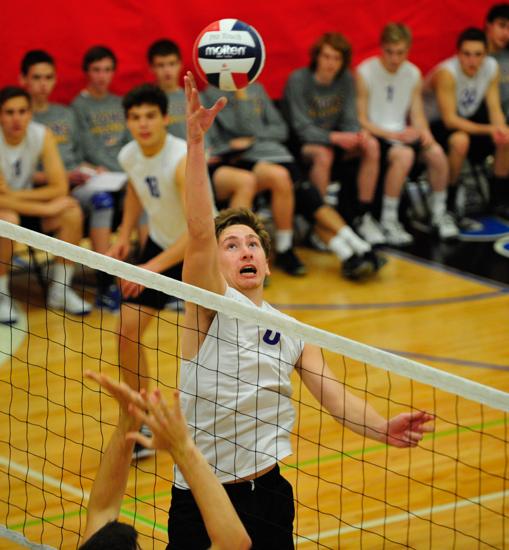 Lyons' Marko Kostich, who is pictured in Friday's match against Maine South, then had had 15 assists and four kills against Stagg at the Lincoln-Way East Invitational. | Gary Middendorf/for Sun-Times Media

FRANKFORT —The Lyons boys volleyball team made quick work of Maine South in pool play at the Lincoln-Way East Invitational on Friday, then finished strong against Stagg to advance to the Gold Flight on Saturday.

Taking advantage of some mistakes by Stagg, Lyons breezed through the first set. However, Stagg kept things interesting in the second game.

Lyons coach Joann Pyritz wasn't pleased with the effort in the second game against Stagg, but was happy to see her team advance.

"In that last game, we were taking it easy and not pushing as hard as we could have," Pyritz said. "I was happy, though, how we came out against Maine South. Not just that we won but that we looked good doing it."

After losing to the Lions, the Hawks came back to defeat Stagg 25-21, 22-25, 15-9 to move onto the Silver Flight. After two close games, the Hawks jumped out to an early lead in the decisive set and eventually won. Stagg will play in the Bronze Flight on Saturday.

Maine South senior Charlie Majewski had four kills, two blocks and one ace against Stagg. Senior John Palucki and junior Evan Walsh each had six kills for the Hawks.

"We were our own worst enemy [against Lyons]," coach Gary Granell said. "Against Stagg we were much more solid."