The Rebels' Ryan Cabot won the long jump and managed to run the anchor leg on the victorious 400-meter relay even though he said he felt his hamstring pull at about the midway point of his sprint. 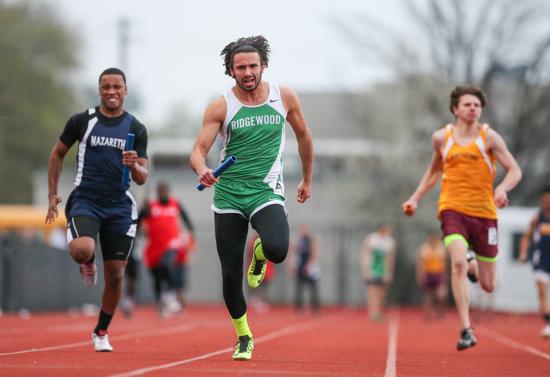 NORRIDGE — Despite losing its best sprinter to a pulled right hamstring in just the second track event of the Ridgewood Co-Ed Invitational, the Ridgewood boys track and field team held on to win the boys portion of the meet Friday evening.

The Rebels finished with 149 points and Nazareth (127 points) took second. Northridge (85) was third, Latin (83) finished in fourth and Northtown (42) took fifth. St. Joseph (28) and Ellison (eight) rounded out the top-seven.

Junior Ryan Cabot started out the meet strong for Ridgewood. He won the long jump (19 feet, 2 inches) and managed to finish the 400-meter relay although he said he felt his hamstring pull at about the midway point of his anchor leg.

“Gotta win,” an upbeat Cabot said when asked why he kept running after he injured himself. “I like winning.”

“It was a big loss for our team,” sophomore sprinter Giuliano Vommaro added. “We really need him.”

The Rebels were able to hold on to their lead thanks in part to their domination of the 400 and 110 hurdles. Sophomore Erick Mangal took first in the 400 (54.20 seconds) and sophomore Kevin Moore (57.76) was second. Senior Mike Liacopolis won the 110 hurdles (17.24) and sophomore Adam Bonifaciuk (17.40) was right behind him to finish in second.

Sophomore Patryk Panocha won the discus with a throw of 111-4 for Ridgewood.

The Nazareth girls track and field team won the girls portion of the Ridgewood meet Friday evening. It wasn't dominant in sprints like Trinity (second place, 110 points) or distance events like Latin (third place, 108), but the Roadrunners were solid throughout the meet and won four different events.

Regina and Ridgewood tied for fourth with 53 points, St. Joseph (51) was sixth, Northtown (seven) was seventh and Ellison (two) was eighth.

Nazareth won the combined title with 257 points over Ridgewood, which finished second with 202 points.

As the anchor on Ridgewood’s 4x100-meter relay team, Ryan Cabot accepted the baton from a teammate with the Rebels in first place and accelerated down the backstretch at the Ridgewood Co-Ed track and field invitational.

Then at the midway point of his relay leg, the junior said he felt the hamstring in his right leg pull. But he kept running.

The injury slowed Cabot down significantly — he was nearly caught by Nazareth’s anchor leg — but he won the race. Cabot fell to the track and grabbed his right leg in agony after crossing the finish line.