Behind the incomparable Chris Wilson, it was No. 5 Minooka that had the ultimate form of redemption as the Indians won their third invitational in as many weeks with a 98-75 victory over Downstate power Belleville West. 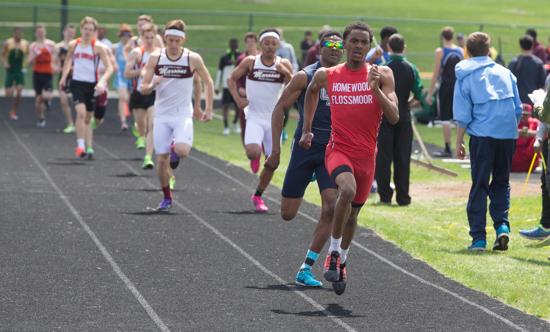 There was a sense of elitism among the track and field competitors Saturday afternoon at Waubonsie Valley in Aurora.

From St. Charles North senior Erik Miller almost clearing the magical barrier of 7 feet in the high jump to Homewood-Flossmoor senior Matt Anyiwo putting on a clinic in the 800-meter run, there was no shortage of quality athletes at the Warriors’ Red Ribbon Classic.

But behind the incomparable Chris Wilson, it was No. 5 Minooka that had the ultimate form of redemption as the Indians won their third invitational in as many weeks with a 98-75 victory over Downstate power Belleville West.

The Indians’ senior anchored the 400 relay to victory, came back to win the open 400 in style and nearly caught Belleville West, the top 1,600 relay in the state, in the meet finale.

Minooka’s boys are the defending Class 3A state champions in the event; Belleville has the best time in the state this season.

“(Wilson) is so talented,” Minooka coach Nick Lundin said. “We really don’t know what we’re capable of, but we have our fingers crossed.”

Wilson won the 400 dash in 49.10 seconds after anchoring the sprint relay to a winning time of 42.63 at the same distance.

“I kind of let guys take it out and duck in behind them,” said Anyiwo, who has posted the second-fastest 800 this spring. “Once I got to 200 (remaining), I just kind of sucked it up and went.”

In the 200, Waubonsie Valley junior Tony Durns cost Ingram a second sprint title with his triumph in 22.55.

“(Ingram) made me run faster than I normally look,” Durns said. “I had to push stronger to win the 200.”

Durns reversed the results in the 100 with his victory.

The host Warriors’ twin senior stalwarts in the field, thrower Jon Harris and jumper James Travis, did not disappoint.

Travis fouled on all three triple jump finals attempts but still managed to hold on with a preliminary effort of 45-8.

“I think I got in one (legal) jump the entire day,” Travis said.

The host Warriors were a point behind Belleville for third place in the 14-team field.

Miller was flawless at all attempts in the high jump in winning with a career- and program-best 6-10.

“I was ready to break out,” said Miller, the North Stars’ returning All-Stater. “I thought I made (7 feet) on the last (attempt). I’m not used to jumping that high. I kicked my feet too early.”