Four-time defending Class 3A state champion Lake Park started to look the part on Saturday at Glenbard West. The Lancers won four events, including Antonio Shenault's victory in the 110 hurdles to finish second behind Edwardsville. 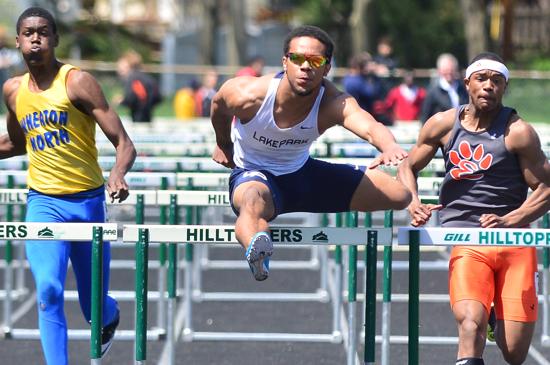 But with the state finals still four weeks away, the four-time defending Class 3A champ Lancers figure they've got plenty of time to get ready.

"That was the best start of any 110s I've raced," Shenault said. "That's something I've been focused on all season."

The 300s were another story, partly because the wind kicked up and got Shenault's footwork messed up. "I went over with my left the first two hurdles," he said.

Elsewhere, the Lancers had a double winner in the throws, as Curtwan Ellis went 58 feet, 3.5 inches in the shot put and 165-4 in the discus, and a first in the pole vault from Elliot Krause (14-6).

They also had two top-eight finishers in the 1,600 (Eric Dade and Lucas Bracher), a rarity for a program that's relied heavily on the field events during its title runs.

"I think the distance kids could be the biggest pleasant surprise for us this year," Lancers coach Jay Ivory said. "People don't really talk about them at all. I think they could gave a great performance for us before it's all said and done."

Five-time state medalist Marcus Jegede missed the meet while recovering from an injury and Joe Pierce may have suffered a hamstring injury in the long jump, according to Ivory.

"It's not quite what I wanted out of this, but we had some good performances," Ivory said. "But then obviously we have room for improvement."

Like other sprinters, he had to contend with a sometimes strong headwind. "On this bank right here it hits you so hard," Towns said, referring to the final stretch. "But you've got to tuck your chin and run through it."

"It was kind of hard trying to run up against it," he said of the wind. "I was just trying to keep my form."

One of the closest finishes, oddly enough, came in the 1,600, where Glenbard South's Joe Singleton held off Wheaton North's Joseph Emmanuel by seven-hundredths of a second, winning in 4:25.19.

The race didn't go anything like Singleton expected, even though it ended to his liking.

"Not at all," he said. "I thought Emmanuel would take it and I would just sit on him for the whole race till 200 to go."

Instead, Lockport's Will Giroux went out fast and made Singleton change plans in a hurry. "I was [thinking], 'Oh crap, I've got to keep him in my sights,'" Singleton said.