Dragan Teonic lost his teaching spot at Hersey due to staff reductions in March, but beat out 40 other candidates to become the new head football coach at Larkin. 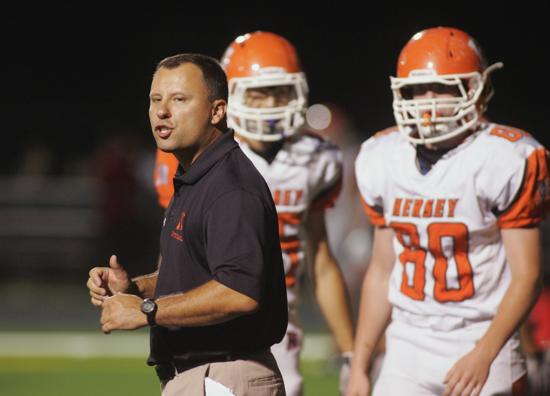 Hersey football coach Dragan Teonic lost his teaching spot at the school due to staff reductions in March. He was hired on Monday as the new Larkin football coach, beating out 40 other candidates according to Larkin Athletic Director Mark Ribbens. Teonic will also serve as a P.E. teacher at the school.

"Dragan has done it before, proven himself as a successful head coach and overhauled a program to turn it around," Ribbens said. "Our numbers have to go up, and I feel like he can be a pied piper of sorts that kids will flock to.

"At Hersey, the participation in all sports went up after he came there because he steers kids into sports in addition to football."

"I love the challenge of building and flipping the culture," Teonic said. "Obviously they have an amazing basketball program there (at Larkin) and I feel we can be successful in that way."

"Statistics get skewed one way or another," Teonic said. "You still win in football by playing good defense, special teams and protecting the ball on offense. I'm not interested in crazy numbers as much as winning and doing all the little things it takes to be a winner."

The 34-year-old Morton East grad played quarterback in high school and at Harper College, then obtained his bachelors at UIC. He has a masters from both Chicago State and Concordia.

Teonic took over the Harper College program in 2006 and his team led the conference in passing yards. Harper led the nation in passing yards in 2007 and 2008 and won the non-scholarship national junior college title in 2008 with an 11-1 record.

After Harper, Teonic was an assistant at York one year before becoming Hersey's head coach. Teonic was the offensive line coach at Riverside-Brookfield when the Bulldogs set 78 state records

Teonic turned around the Hersey program, which was 8-37 the five years before he arrived. The Huskies were 17-20 in Teonic's four years, and won last year's Mid-Suburban East title, the school's first conference crown in 37 years. Hersey went 3-6 Teonic's first season, but started 3-0 and then lost four key players to injuries and several to suspensions, including the starting quarterback.

Now he'll try to turn around a program that has fallen behind Batavia, Geneva and both St. Charles schools in the Upstate Eight River.

"I want players to know the reasons we're doing things, to buy in and understand," Teonic said. "When a change is made sometimes seniors get lost in the shuffle but we are not going do that. We'll bank on them pushing themselves.

"I want to create a culture and atmosphere where everyone -- freshmen through seniors -- wants to always get better."

Royals players will get the chance to meet Teonic later this week, likely Wednesday. He inherits a program that loses 27 seniors.

"He has forgotten more than I learned in my 11 years as a coach," Ribbens said. "His knowledge of every aspect of the game was evident from the first time I met him. He impressed our search committee completely as an educator."