Warren couldn't stop scoring in an impressive 14-1 rout of Mundelein. 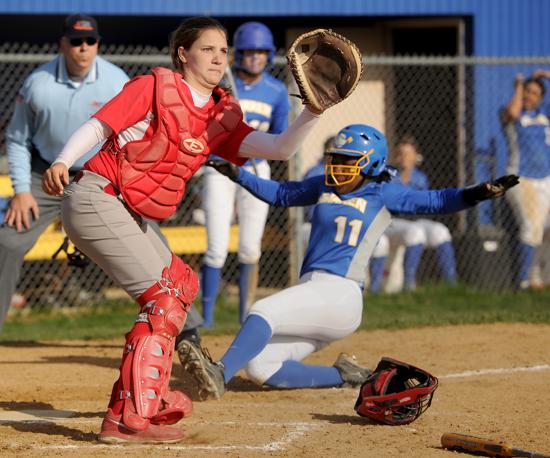 The throw from first base came too late for Mundelein's Maggie Mahar to keep Warren's Amber Leneau (11) from scoring. | Brian O'Mahoney/For Sun-Times Media

Warren wanted to remain the No. 1 challenger to front-running Libertyville in the North Suburban Conference Lake Division race, and visiting Mundelein wanted to be in the spot that Warren currently occupies. For the Mustangs (14-8 overall, 2-5 division), it wasn’t to be as Warren (19-7 overall, 6-2 division) played like a champ in a 14-1 rout.

Lauren Fairweather’s homer in the second inning gave Mundelein an early 1-0 lead, but the proverbial roof fell in on Mustang pitcher Nicole Parney in the bottom of the frame. Amber Leneau and Michelle Vasen each had two-run doubles and Crystal Pennell added an RBI single in a five-run inning. A seven-run fourth kicked it into slaughter-rule territory.

Vasen was 4-for-4 at the plate with the two-run double, but shared the spotlight with pitcher Jenny Carpenter who allowed two hits and fanned six in five frames. The Mustangs’ two hits were the only times the ball left the infield.

"We’re the kind of team where if one person is up, it helps bring everybody else up. We really feed off of each other.” — Warren’s Vasen

“It makes it so much easier when you have that kind of run support. If it’s a tight game, you’re thinking ‘I can’t mess up,’ but even that home run (in the first) didn’t phase me because we came ready to hit today.” — Warren’s Carpenter

“Every coach’s thing is that it’s not where you start, it’s where you finish. You want to be peaking toward the end of the season. Hopefully, we’ll be playing out best softball in a few weeks.” — Warren first-year coach Bryan McNulty

“We keep reiterating that we want to put Mundelein back on the map, but I think sometimes it gets into their head that a team like Warren is supposed to beat us. It’s like we have to remind them, ‘You know ladies, we’re pretty good too. Let’s play our brand of softball.’ If we’re going to go out and make errors, especially against teams on our side of the conference, we’re not going to win games.” — Mundelein coach Brett Wilhelm