Metea Valley locks up share of conference crown in win

Metea Valley clinched a share of the Upstate Eight Valley title, thanks to a commanding 8-0 win over East Aurora Tuesday. 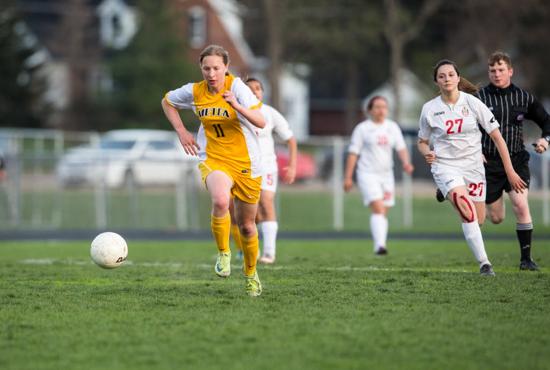 Metea Valley forward Paige Velez (11) plays the ball on a break away against East Aurora. | Sean King / For Sun-Times Media

Emily Harvey had an evening to remember on Tuesday.
The Metea Valley senior midfielder scored her first goal of the season in her final Upstate Eight Conference Valley Division match, helping the Mustangs clinch a share of the league title by knocking off host East Aurora 8-0.
Metea Valley (13-3-1, 5-0-1) now has won the UEC Valley twice in the past three years. It shares the crown with Waubonsie Valley (14-1-3, 5-0-1), which will represent the division in the UEC championship game thanks to a greater goal differential.
“We’ve worked really hard this season so it’s great that we’re seeing results,” Harvey said. “It feels really good. It’s our last year playing with this team so it’s really great to get that accomplishment.”
Senior Jenna Kentgen opened the scoring just three minutes into the game and junior Alena Sidwell tallied the next two goals. When freshman Nicki Hernandez made it 4-0 with 23:29 left in the first half, Metea Valley coach Pat Feulner pulled most of his starters and went with a senior-laden lineup.
Harvey scored her goal seven minutes later, running onto a lead pass from senior Emilie Schmidt and beating East Aurora goalkeeper Ruby Garcia with a short shot for a 5-0 cushion. It was one of countless breakaways the Mustangs enjoyed.
“In practice today, Coach worked with us more, specifically on giving us balls and telling ourselves to just keep focused, don’t look at the keeper, keep your head down and shoot,” Harvey said.
The practice paid off as the Mustangs peppered the Tomcats (5-11, 2-4) with 28 shots while allowing just five. They had two shots hit the post, four barely miss the net and seven more stopped by Garcia.
“Practice is a [big reason for the dominance],” Harvey said. “Everyone works hard and even people who aren’t starters, they work really hard to make everyone else better, so I think that’s the main thing.”
Benedictine-bound Paige Velez also had a big night, recording two goals and assisting on sophomore Madie Sandberg’s goal in the second half. It was her second two-goal game of the season.
“It was a lot of fun to play out there with all the seniors because not all of us get to play together,” Velez said. “We tend to work really well together so it’s fun to be out there and play with all my friends.”
Though the Mustangs won’t get to play in the UEC title game, Velez said the title still has great meaning to this year’s senior class.
“We were conference champions my sophomore year as well so being able to kind of relive that experience my senior year is absolutely wonderful, especially for our program because we’re still fairly new,” Velez said. “It’s wonderful for our program and our school in general.”
Senior Chauntelle Johnson recorded one save to record the eighth shutout for Metea, which went 2-1 against stiff competition at the Heart of America Tournament last weekend in Burlington, Iowa. The only loss was a 4-2 decision to St. Teresa (MO), the nation’s top-ranked team.