Antioch needed a win to remain a factor in the North Suburban Prairie title race, but Wauconda sophomore ace Kayla Wedl and the Bulldogs’ bats prevented that from happening by earning the 9-5 win. 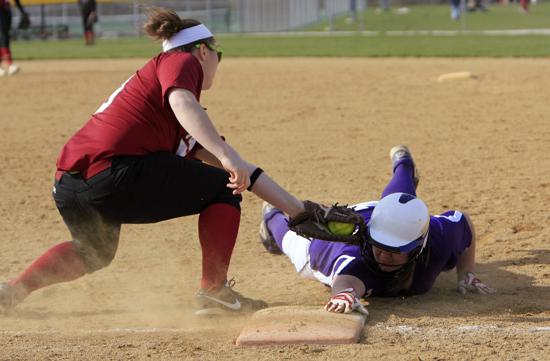 Antioch needed a win to remain a factor in the North Suburban Prairie title race, but Wauconda sophomore ace Kayla Wedl and the Bulldogs’ bats prevented that from happening by earning the 9-5 win. Lakes has one division loss and Grant two while Antioch (8-12, 3-4) now assumes the role of spoiler.

In the top of the second of a scoreless game, Wauconda (18-4, 8-0) had a runner on second with two out. Jena Heck’s single got the Bulldogs on the board, and after Hayley Redmann walked, Alyssa Wagner’s double to left-center drove in two more. Wedl walked and Taylor McCarthy reached on an error to load the bases. Antioch pitcher Hannah Cook walked Lauren Nee to hand Wauconda another run before a ground out ended the four-run inning.

Wedl fanned 11 and didn’t walk anyone. Though she allowed 12 hits — seven singles in the final two innings — she stranded Antioch runners at second and third in the sixth and got a bases-loaded strikeout to end the game.

For Wauconda, Paige Motley was 2-for-4 with a double and two runs. Heck had two hits, two RBI and scored three times. Wagner had two hits and three RBI. For Antioch, Jessica Tyrell, Sage Keyes, Taylor Schiltz, Jill Foote and Ashley Stephens each had two hits.

“I was happy with the way the girls kept battling, but we just made too many mistakes. The same sort of thing that happened against Lakes. Against Lakes we had four errors in one inning. Here, we had seven during the game. Our last three games have not been good defensively. Even against Stevenson we had four errors in two innings. You can’t give teams chances like that. Our pitching is young, so we have to give them some support, and that means having a good defense out there.” — Antioch coach Anthony Rocco

“We like being on top, especially not having lost in the division. We were disappointed that Grant won it last year, so we definitely wanted to take it this year. It’s been an exciting season so far.” — Wedl