After losing three times to Lane last season, Young has defeated the Indians in both regular-season meetings this year, including an 11-3 rout Wednesday afternoon. 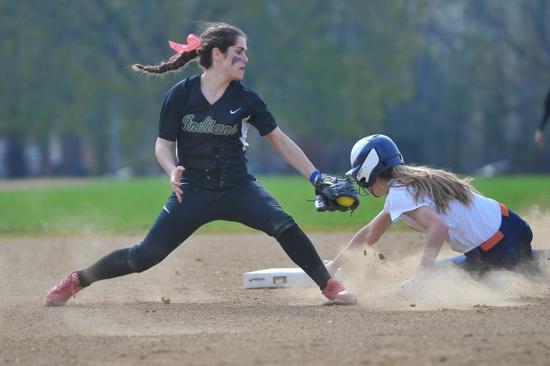 Young coach Mike Hinrichs had some simple instructions to his team before its game against Lane Wednesday: Hit the ball hard and score runs.

The Dolphins did both and handed the Indians an 11-3 Red-North loss. Make that two wins in a row for Young over the Indians (14-7, 8-2) after they were swept in all three games last year including the city title game.

"I'm excited about this since we didn't beat them once last year," Young shortstop Sam Berghoff said. "We stayed in the game mentally and that's the difference."

Berghoff was a difference maker for the Dolphins with her glove and at the plate. She made every difficult play look routine while leading the 12-hit barrage with 4-for-5 day, including a home run and five RBI.

"It doesn't take long to figure out that Sam is a big time player," said Hinrichs, who watched Berghoff break the school home run record with 10 as a freshman. "She is at about six home runs now and can just do it all."

Berghoff had plenty of help on offense, with four teammates punching out two hits apiece. Nikki Pietrus, Maddie Divittorio, Natalie Magnus, and Grace Zelle were amongst that multi-hit club. Magnus added a triple and three RBI, while Divittorio added a two-run double in the first.

For the Indians, Eva Stees and Desiree Velazquez each had two hits. Stees hit a towering home run in the seventh and doubled in the third. Kayla Garcia added an RBI single in the third that scored Stees.

Avelyss Roman started the game in the circle and took the loss for the Indians. The Dolphins led 2-0 after one, 4-2 after three, and 8-2 after four.

"It happens," said Lane coach Devin Miller, whose team recorded a signature win over Trinity the day before. "I was trying to keep them off balance by changing the pitcher.  We'll come back, I have compete faith in our girls."