David MacDonald has been a fearless performer in the gym the past two seasons for Wheaton Co-op. You couldn’t blame him if he were a bit timid though during Wednesday’s Wheaton Warrenville South sectional. 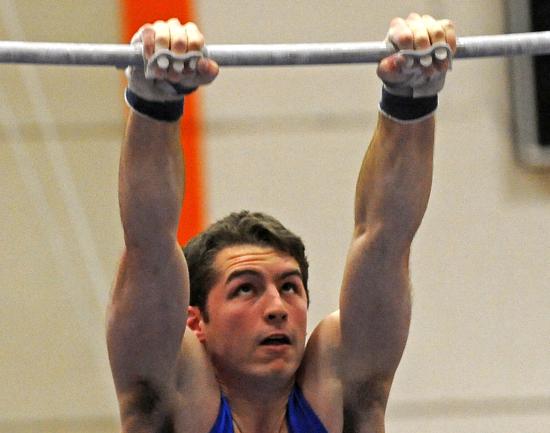 David MacDonald has been a fearless performer in the gym the past two seasons for Wheaton Co-op.

You couldn’t blame him if he were a bit timid though during Wednesday’s Wheaton Warrenville South sectional.

Competing for the first time in 17 days, when he suffered a mild concussion and required 11 stitches after falling on high bar at the Donaldson Invite, MacDonald looked nearly as brilliant as he did when he won the all-around title at state last season, leading Wheaton co-op to its sixth consecutive state appearance with 158.1 points.

Naperville Central was a distant second with a 141.8 and Naperville North placed third with a 134.8.

“I was pretty terrified, I mean, not terrified, but I was much more nervous than I usually am,” MacDonald said. “I had so much adrenalin going on (still) rings at the start and once I did that, I started to calm down a bit, but when I got on high bar (fourth event), the nervousness came back.”

“I hit my set which was really good,” Sansone said. “I stuck my double back, but we had some struggles before high bar, which I was trying to get out of my mind to hit the set and get a good team score.”

Despite watering down his routines, MacDonald finished with a top all-around total of 54.75 while Sansone followed with a 52.65. Naperville Central’s Ryan Durkin was third with a 50.45.

Wheaton Co-op, the two-time defending state champs, became the first team to advance to the state finals on May 16-17 at Hinsdale Central.

“It’s a great accomplishment as all those guys came together,” Wheaton Co-op coach Greg Gebhardt said. “It was not our smoothest meet, but the guys always give a team effort from one through five. The first guy understands he has a job and if he doesn’t the other guys pick him up.”