Junior Qarin Johnnic returns to state with three new teammates as WW South embarks on its quest to capture the state bass fishing crown Friday and Saturday at Carlyle Lake. 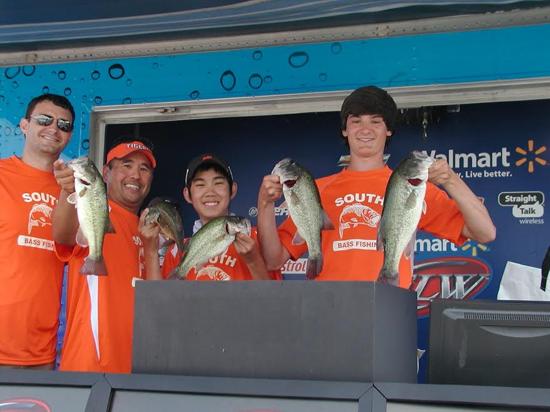 It's that time of year: Illinois's state championship for bass fishing and proms.

For Billy Byrne, it overlaps.

''I'm anticipating nothing less than what the team did last year (third place),'' the Notre Dame junior emailed. ''Notre Dame junior prom is on the same Saturday as state so the pressure is on to bring home a trophy. I'm actually missing half of the dance which my date wasn't too happy about, but hey, priorities.''

The priorities for Friday and Saturday are plain, catch big keeper bass at the IHSA's sixth state bass fishing championship on Carlyle Lake.

This year is unique in the three schools that finished 1-2-3 last year — Downstate Morton, Wheaton Warrenville South and Notre Dame — all have teams back.

Only one member of the second-place Tiger boat from last year — junior Qarin Johnnic was on the qualifying team but did not fish — is on the advancing boat this year. Sophomore Lintaro Kajiwara, who fished on the second-place boat, helped with prefishing.

''I am hoping our patterns from the past will hold up; if not, I am hoping we can discover a pattern in prefishing or early in the tournament,'' coach Craig Lawrence said.

There's been one constant through the five years the Tigers reached state.

''Our team driver is Art Tang — the most talented fisherman I know,'' Lawrence emailed. ''He has driven for us each year we have qualified for state.''

Each qualifying boat has an adult driver and two fishermen, who may be subbed out as needed. The goal is to catch the five heaviest bass, 12 inches or longer, each day.

Tom Sora, a senior at Notre Dame who will play football at North Central in the fall, was part of the third-place team last spring.

''The thing I look forward to the most about returning to Carlyle is definitely the atmosphere of the competition,'' Sora emailed. ''The fishing is great, however, the set up and the intensity of both competition days are even better. The set up, program and volunteers really set the tone for a great competition.''

He hopes they get both days in this year — last year weather cut finals to one day.

``As a team, they complement each other very well,'' Dons coach Dan Svachula emailed. ``Tommy is stronger with the soft plastics while Billy is a natural with crank baits.''

Carlyle is not easy water to understand for fishermen.

``This year we are approaching this as if we have never been on Carlyle,'' Svachula emailed. ``It is a much earlier and we have had less rain. We know where we caught fish and where some of the other teams did so as well.''

Other teams to watch are Brother Rice, Zion-Benton, St. Charles North, Huntley and Niles North, which advanced both of their boats. On the individual side, Providence junior Matt Bomba qualified for his third consecutive state finals, and Brother Rice seniors Joe Hays and Brendan Moriarty are tournament tested.