Ace Allison Quigley fanned 14 batters Thursday — including 11 of the first 13 hitters she faced — and walked one to lead New Trier to a 5-0 victory against host Waukegan. 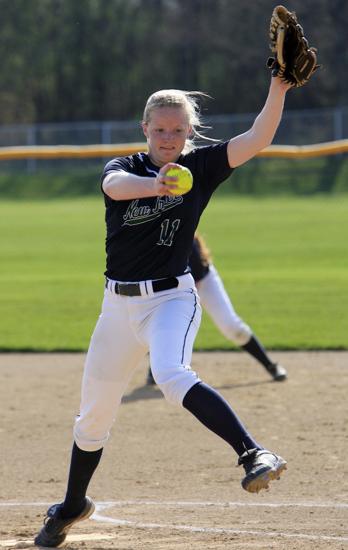 THE SKINNY: Host Waukegan has been trying all season to move up from its position at the top of the “best of the rest” category, but any hope that it would happen on Thursday was quickly dashed by New Trier senior hurler Allison Quigley, who was as dominant as a pitcher can get in a 5-0 Central Suburban League South Division win for the Trevians (19-2 overall, 8-0 division). Waukegan is 11-10 and 2-5, and will host Zion-Benton on Friday at 7:30 at Dugdale Park on Senior Night.

THE TURNING POINT: In the top of the first, Quigley’s double plated the game’s first run, and given the way the Trevians’ ace was dealing, that was all she really needed.

THE STAR: Quigley fanned 14 — including 11 of the first 13 hitters she faced — and walked one. The only hit she allowed was a blooper that fell on the infield behind the first baseman. At the plate, she hit a home run and had an RBI double. When the teams played last month, she pitched a two-hitter in a 3-0 Trevian win. Next year, she’ll be playing at Middlebury, which is an NCAA Division III program in Vermont.

BY THE NUMBERS: For New Trier, Abigail Boyd was 2-for-3 with a walk and double, Megan Neuhaus tripled and scored in the fourth, and Laura Bagan singled and scored in the sixth. Rebecca Stern had a two-run single in the sixth. For Waukegan, Benita Bones walked in the fifth and Chanel Pugh followed with Waukegan’s only hit of the day, dubbing the ball just over the head of first baseman Lauren Secaras and behind the first base bag. Second baseman Lily Novak made a heroic diving effort to try to save the no-hitter but came up just short of being able to squeeze the ball into her glove. Bones advanced to third on the play, giving the Bulldogs their best scoring chance, but Quigley got Logan Smith to strike out to end the inning.

QUOTABLE: “Honestly, I kind of felt like I was a little off. I’m still kind of getting used to the warmer weather and not wearing as much, but my rise ball was definitely working really well at the beginning of the game. A lot of girls were chasing after it.” — Quigley

QUOTABLE: “We were disappointed with some of our situational hitting. With girls on base, we were popping the ball up instead of getting the ball down and giving our runners a chance to do something. It wasn’t a great offensive game, but defensively the girls played well, and Allison pitched just a heckuva game.” — New Trier coach John Cadwell

QUOTABLE: ''We have Zion tomorrow (Friday) night for Senior Night, under the lights. The girls will be amped up for that because of the rivalry and playing at night. They love that stuff. We have to bounce back tomorrow night, and everything will be set up for us to do so.” — Waukegan coach Windell Piercy