Local teams still in hunt at state, but Robinson's big bass the story

Connor Griffin hauled in the biggest fish in the history of the state finals, a 7 pound, 4 ounce largemouth bass to give Robinson the lead heading into Day 2. But a few local teams still have a shot. 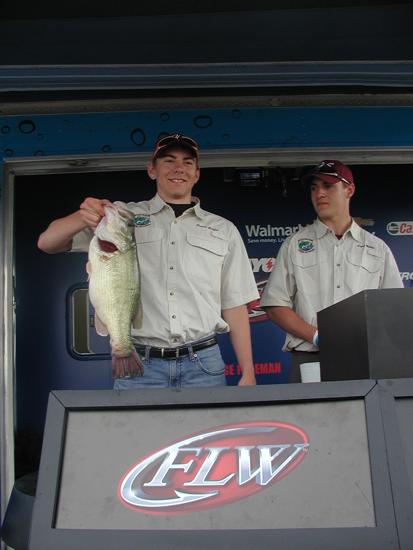 CARLYLE, Ill — They don’t get any bigger than the 7-pound, 4-ounce largemouth bass Robinson’s Connor Griffin weighed in on Friday.

At least not on Carlyle Lake.

With the big catch in tow, Griffin and Logan Miller weighed in 16 pounds, 2 ounces, one of the biggest one-day bags in the six years of the bass fishing state championship, to lead after Day 1.

The goal each day is to catch the five heaviest bass, 12 inches or longer. Moline was second with 14-9.

Three Chicago-area schools are in the top 10 and positioned to make a run Saturday.

Grant, making its fifth consecutive trip to state, was third with 13-3. Wheaton Warrenville South, second last year, is in eighth with 9-15. Zion-Benton, which advanced both boats, has one boat in 10th with 9-6.

The Grant team of junior Jake Bescow and freshman Ethan Heinz think their consistency could pay off. They were throwing crankbaits and ChatterBaits.

‘‘We didn’t lose any fish,’’ said Heinz, who caught four of the five keepers. ‘‘[Bescow] caught the chunk at the end.’’

The chunk that Bescow caught was their anchor bass (3-15).

‘‘The end of the day might have helped us,’’ Bescow said. ‘‘It might have kept some people from catching more fish.’’

The Illinois High School Association staff halted the tournament at 1:30 p.m. due to lightning and ordered boats to safe harbor. Weather has either shortened, delayed or postponed fishing every year of the tournament.

Each qualifying boat has an adult driver and two fishermen, who may be subbed out as needed.

With another day of fishing to come, few teams gave up much on specifics.

Zion-Benton coach Brad Rubin said the big prespawn females are trying to come in. Some already are up on beds, others in transition.

The Zee-Bees’ first boat of Aaron Pontillo and Zac Livingston is close enough to make it interesting.

Brother Rice seniors Joe Hays and Brendan Moriarty had the advantage of being the first of the 66 boats out in the morning and made it to one of the favored spots to fish docks. They are in 12th with 8-13.

‘‘We were the first ones there and pulled out bass while fighting eight other boats,’’ Moriarty said. ‘‘We only had five bites all day and we caught them.’’

But Griffin’s bass, the first 7-pounder caught in the state finals, was the story.

‘‘I have been here since 1993 and managing it since 2001 and that is the biggest bass,’’ veteran fisheries biologist Barry Newman said.

And it came down to a good net job by Miller.

‘‘He about went into the water when he went to net it and it went under the boat,’’ Griffin said.