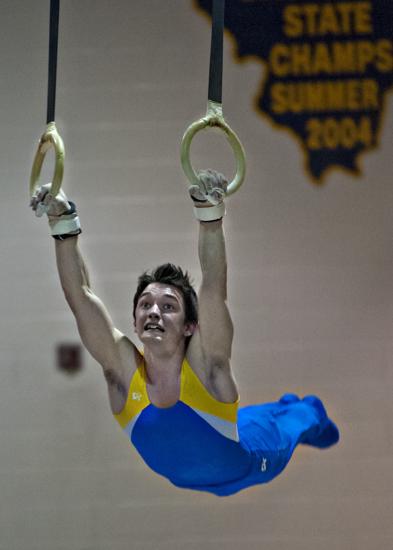 WESTERN SPRINGS — The Niles West and Lyons boys gymnastics teams entered the Lyons Sectional as the two best teams. They both began on high bar Friday, and Lyons asserted itself.

The Lions were exceptional on high bar. Freshman Alex Janicki scored a 7.95 and junior Chris Rediehs followed with an 8.0 to set the tone for the rest of the meet.

Lyons sustained its momentum during the next five events, sticking its routines to the delight of the crowd en route to a season-best score of 156.05 points and a sectional title. The Lions were the only team to automatically advance to state, which is May 16-17 at Hinsdale Central.

“When we got through high bar — and we did really well — we started cruising through the other events,” said Rediehs, who won the all-around (54.05).

The Wolves struggled on high bar. They were 2.8 points behind the Lions after just one event and, while they rebounded behind standout Dalai Jamiyankhuu, they couldn't make up the deficit. Niles West finished in second with 148.4 points.

“We had a rough start on high bar, and usually we're a little bit better than what we did today,” Niles West coach Adrian Batista said. “But then we came through on floor and had probably the best floor we've had all year. Pommel horse, we've been consistent, and rings [was also good]. I think we went five for six.”

Rediehs and Jamiyankhuu finished first and second in the all-around — the Niles West sophomore scored 53.4 points — and combined to take first (or tie for first) in all six events. Rediehs tied for first with Janicki with a 9.6 on floor exercise. He won high bar (8.0), vault (9.65) and parallel bars (9.45) outright.

The top five individuals in each event automatically earned a state berth.

Three teams will advance to state as at-large qualifiers, but those berths won't be decided until after all five sectionals have been completed.