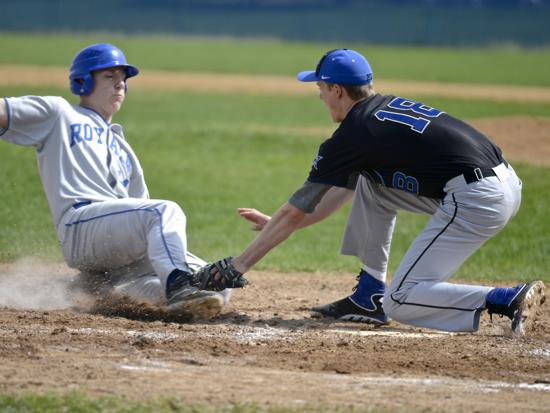 Brayden Royse (14) of the Royals is tagged out at home by pitcher Ryan Suyak (18) of the North Stars. | Tim Carroll/for Sun-Times Media

It was all hands on deck Saturday for St. Charles North due to a short-handed pitching staff. And for Larkin, it was all about Jon Lenz.

Hunter Buerster stepped up to fill the void as North captured the first game 9-6, but the North Stars dropped the nightcap of the Upstate Eight River doubleheader 9-0 as Lenz pitched a complete-game shutout for the host Royals.

“This was just my second opportunity to pitch this year,” Buerster said. “I know my teammates have my back and the coaches trust me.’’

That effort allowed the North Stars to forge ahead with four more runs for the victory. John Legare used his speed from the second spot in the order to reach base in all four plate appearances, score two runs, drive in a run and steal five bases.

“John is a dynamic athlete who plays both baseball and football,’’ St. Charles North coach Todd Genke said. “He has a real good baseball IQ and he belongs at the top of the order producing runs.’’

The second game featured the dominant performance of Lenz (2-1), although it didn’t start out that way.

The hard-throwing right-hander allowed hits to the first three batters, but was aided by his brother Dan, who threw out Cory Wright trying to steal. From that point on, Lenz allowed only four more hits and one walk while striking out six.

“That was a good throw by my brother,” Lenz said. “I trust him more than anybody else.”

Tyler Kalusa came up a home run short of the cycle in Game 2 as he scored three times and drove in four runs.