Brooks' Ebony McClendon was second in the 200-meter dash, finishing in 24.57 seconds, behind North Lawndale’s Briyahna Desrosiers (24.47) and ahead of Johnson’s Ryan Preacely (24.65). 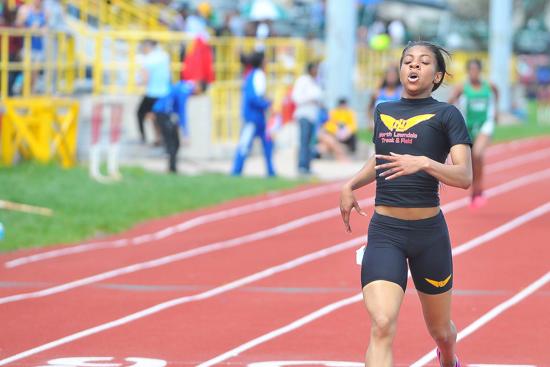 The three best sprinters in the city will go their separate ways after running in the same high school race for the last time.

Brooks’ Ebony McClendon, for one, is a little sad about that.

“I wish all three of us were in the same class because that was such a good race,” McClendon said of the 200-meter dash in Saturday’s Public League meet at Hanson Stadium.

Afterward, it was all she could do to crawl over to find a little shade near the finish line.

“My legs feel like they were gone,” Desrosiers said. “The second I came off that track I could hardly breathe, I could barely walk, the sun was getting to me.”

But somehow she got the job done.

“She’s a beast,” North Lawndale coach Zontavius Johnson said. “I thought she was dead in the water in the 200.”

But McClendon and Preacely brought out the best in Desrosiers.

“It surely does push me,” Desrosiers said of the competition. “They’re on the inside lane. I’ve got to make sure they don’t catch up to me on the stagger.”

She’ll see McClendon again at the Class 2A U-High Sectional (Desrosiers is headed to the Class 3A St. Ignatius Sectional), and is happy about that.

“I just know for a fact that when we go to the state sectionals, it’s going to be that close,” Preacely said. “So I’m ready for it.”